Loving mums, sly scorpions, and ‘rolling rocks on your fingers’ were among the eclectic images explored by more than 120 young poets at QMUL’s Globe Road Poetry Festival. 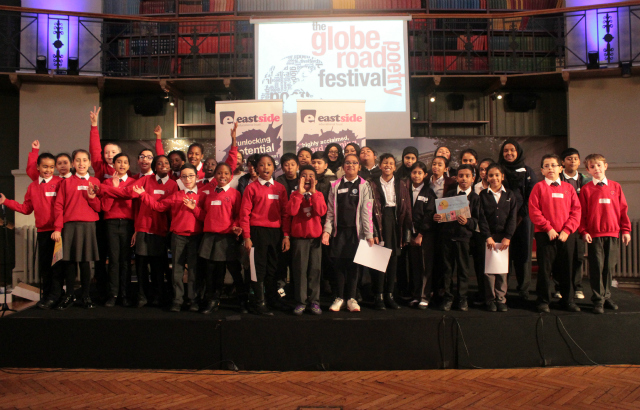 The poetry slam was the culmination of weeks of preparation and practice performances, all facilitated by Eastside Educational Trust.

In October, the students took part in creativity workshops where they brainstormed ideas and developed poems around the theme of ‘mother tongues and conversations from home’. The workshops were led by professional poets Michaël Vidon and Miriam Nash.

Three groups from each class were selected to take part in the grand finale, held at QMUL’s Octagon and hosted by writer and filmmaker Paula Varjack.

“If ever evidence was needed that poetry can be embraced and enjoyed by young people – it was very much on display here. The creativity and confidence of the performers was amazing – I loved it, and dearly hope that the experience lit a poetic spark in the minds of those in the room.”

She added: “Huge congratulations to the winners but well done to everyone who took part, supported their class mates, and composed such interesting and vivid poetry.”

Eastside Educational Trust’s Director, Christopher Enticott said: “As an organisation focussed on developing young people’s creativity, it is fantastic to see the support offered to the local community by QMUL. It is important for young people and their families to understand that creativity is a valued and valuable skill.”