Trevor Dadson, Professor of Hispanic Studies at Queen Mary University of London has been awarded the Encomienda de la Orden de Isabel la Católica (Order of Isabella the Catholic) by the King of Spain, Felipe VI. 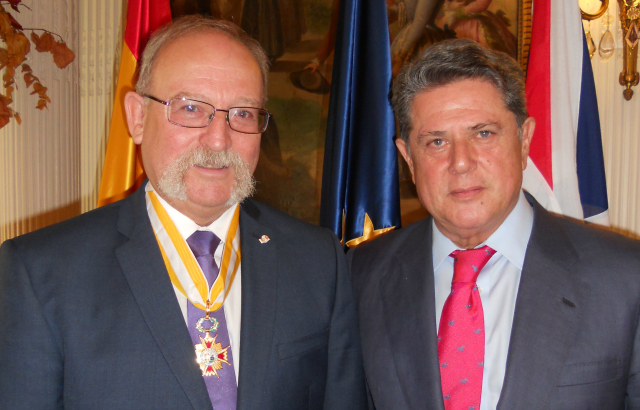 The prestigious honour is a Spanish civil order, granted in recognition of services that benefit the country. Professor Dadson received the award for his exceptional contribution to Spanish culture, during a ceremony at the Spanish Embassy in London.

“I am immensely proud to have been awarded this honour by the King of Spain. I have dedicated nearly fifty years of my life to the study of the literature, history and culture of the Spanish Golden Age (sixteenth and seventeenth centuries) and it has provided me with enormous personal and scholarly satisfaction. To have that work recognised is always an additional pleasure and I am grateful to the Ambassador of Spain in London, don Federico Trillo-Figueroa, and the Minister Counsellor for Cultural and Scientific Affairs, don Fidel López Álvarez, for having put my name forward for this award."

Professor Dadson is based at QMUL’s School of Languages, Linguistics and Film. The head of school, Professor Adrian Armstrong described the honour as “a wonderful recognition of an exceptional scholar and an exemplary colleague, who has done more to shape our understanding of the Spanish Golden Age than anyone else alive”.

Trevor is Editor-in-Chief of Hispanic Research Journal, which is published by QMUL’s department of Iberian and Latin American studies. He also chairs the Editorial Board of Studies in Hispanic and Lusophone Cultures, a new series of texts published by Legenda (Oxford).

Professor Dadson is currently working on an edition of the more than 500 letters the Count of Salinas sent as Viceroy from Lisbon between 1617 and 1622.

He has served as a Fellow of the British Academy since 2008.