On the one year anniversary of the Ebola outbreak, Dr Sophie Harman - Reader in International Relations at QMUL - explores the devastating impact on women in affected regions. 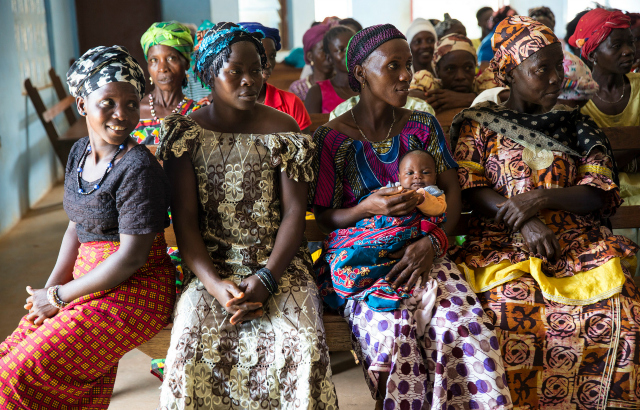 Following an international conference on Ebola, the European Council has reiterated its “firm commitment” to ending the Ebola epidemic by getting new cases down to zero. More interesting than the principle of the commitment – which is both welcome and necessary - is the Council’s reference to the role of women and girls. In the statement, the Council:

“…underlines the importance of the Co-chairs' commitments to improve local and national governance, transparency and accountability, to provide for more inclusive and effective results in service delivery for citizens, including access for all to health and education, and to address the particular burden placed on women and girls as a result of the crisis.”

Such a focus is, on the surface at least, uncontroversial. Ebola has – alongside children and people with disabilities - had a particularly ruinous effect on the lives of women. However, while the focus on women is both welcome and necessary, the manner in which government, EU and global health institutions frame this focus is deeply problematic for several reasons.

First, we simply don’t know enough about the gendered impact of Ebola. The World Health Organisation (WHO) did not publish sex-disaggregated data on Ebola until December 2014. Thus, the crucial issue of gender was not deemed a concern for the WHO until four months after the epidemic was noted as “a public health emergency of international concern”. Four months is a long time in the context of such a crisis, and a data vacuum makes targeted interventions much more difficult.

There are no gender-based indicators in the WHO’s Ebola Response Roadmap and there is very little reporting on the impact of the epidemic on women. Reliable data on confirmed and suspected cases is difficult to achieve and in some cases is overtly contradictory. For instance, in September, UN Women, and the Africa Development Bank, suggested the majority of Ebola cases were women: yet WHO data suggests no significant difference between rates among men and women. The WHO data rests on thin, quantitative estimates. It may well be correct, but much more research needs to be done to investigate the gendered impacts of the epidemic.

Even where interventions by institutions like WHO and the World Bank address directly the crisis facing women; they tend to be sporadic, poorly implemented, and - in many cases – narrowly focused on women as mothers.

These institutions are often primarily concerned with maternal and newborn child mortality, as women avoid health and treatment facilities due to fear of Ebola. Such a focus is – unquestionably – essential, however the health of women, and the many impacts of Ebola on women, extend far beyond the confines of maternal health.

The sense that Ebola disproportionately impacts on women is sadly not surprising, given women’s burden of care. Women perform vital care roles in the family and the community and are overly represented in the informal economy.

Women underpin the health systems of many low-income countries by delivering primary care functions - mainly for free and often based on a sense of expectation that such a role is “women’s work”. This not only puts an immense physical and practical burden on women, but may also lead to them putting the health of others ahead of themselves. These roles place women in the front line, against a disease and a set of circumstances against which they have little chance and less hope.

Some institutions such as the World Bank recognise the burden of care but seek – with a grim pragmatism - to protect the health of women so that their desperate “roles” can continue to be carried out. The focus here is on equipping women as the engines of development - and reaching targets on maternal and child health - rather than recognising the health of all women as essential in itself.

The issue of gender and the role of women in the formal and informal care economy do not feature in any global health strategies on building resilient health systems. In global health policy the free labour of women in primary care roles is simply assumed. Global health institutions continually frame women as vulnerable, while at the same time assuming that they will continue to provide their labour for free, to deliver primary care in health systems that are ill equipped and pathetically under-funded.

During International Women’s Day, high-profile women such as Sheryl Sandberg and Beyoncé reiterated what women and feminists working in international development have known for a long time: poverty is sexist. But, so too are the institutions that seek to address poverty and diseases such as Ebola. “Invest in women” is a well-worn mantra of international development, but we must ask the question – invest for whom?

She is an active member of the Global Health Politics research community through her roles as co-convenor of the BISA Global Health working group, ISA Global Health Section Executive Membership, and advisory work to international agencies such as WHO, the European Parliament and UNAIDS.