Researchers have found what they believe to be the oldest tea in Britain. The dried green tea was acquired in China, around the year 1700, by ship’s surgeon James Cuninghame, who subsequently gave it as a gift to the famous physician and collector of curiosities, Hans Sloane. 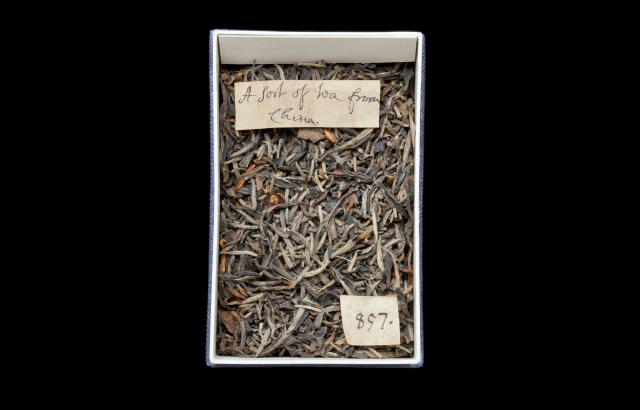 © The Trustees of the Natural History Museum, London

Sloane bequeathed the tea sample to the British Museum, as part of his ‘Vegetable Substances’ collection. The tea, labelled ‘A sort of Tea from China’ and acknowledged as a gift ‘from Mr Cuninghame’, was later transferred to the Natural History Museum (NHM) where it was stored within the botanical collections.

It remained unnoticed until a recent study on the ‘Vegetable Substances’ by NHM researchers allowed the collection’s contents to be readily located. Historians from Queen Mary University of London (QMUL) subsequently identified the sample’s significance as the oldest physical remnant of the nation’s favourite drink. The QMUL historians were researching a forthcoming book; Empire of Tea: The Asian Leaf that Conquered the World.

According to NHM researchers Dr Charlie Jarvis and Victoria Pickering, the tea was “almost certainly collected or purchased by James Cuninghame, a Scottish surgeon, trader and collector, during one of his two trips to China in the late seventeenth and early eighteenth century”.

Dr Richard Coulton, researcher at QMUL and one of the authors of Empire of Tea, said: “Among other things, Cuninghame was a pretty intrepid plant-hunter. In 1697 he joined an illicit private trading voyage to Amoy in Fujian province, a centre for the early-modern tea trade.

“He arrived back in Britain in 1699 and very soon after set out again to China with the famous East India Company. He stayed for three years on the island of Chusan, where he found the tea plant growing wild and witnessed the local manufacturing of leaf tea.”

Ubiquitous today, the common cup of tea was once considered an exotic and fashionable pleasure. Dr Coulton says the consumption of tea in Britain did not become widespread until decades later.

“In the seventeenth century, the simple act of blending hot water with infused leaves was considered pretty extraordinary. It was priced as a luxury item and the best tea was ten times more expensive than the best coffee. In 1663, tea was priced at up to 60 shillings per pound for the finest quality, whereas the best coffee was only six shillings per pound. What makes this discovery so fascinating is that it captures the very moment at which tea was about to lay claim to a mass market in Britain.”

So what would the specimen taste like to modern tea drinkers?

“It would taste quite some way from the milk and two sugars variety”, said Dr Coulton.

“The tea is loose-leaf green tea, manufactured by peasant labourers on small-holdings in China. The basic process for manual tea production hasn’t really changed, so we might assume that this tea would have tasted much like an artisanal green tea today, albeit one of the rough-and-ready rather than boutique variety. The 'green'-ness of the tea is interesting: for its first half century, so 1650-1700, Britain's tea-habit was almost entirely green. It wasn’t until the second quarter of the eighteenth century that darker teas started to take over.”

The specimen was found during research for an upcoming book called ‘Empire of Tea: The Asian Leaf that Conquered the World’, written by Professor Markman Ellis, Dr Richard Coulton, and Dr Matthew Mauger. The book is published by Reaktion Books, and will be in bookshops in July 2015.