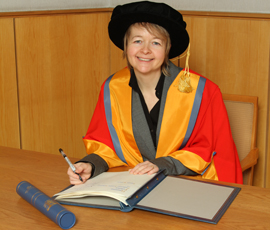 The winter ceremonies on Tuesday 11 and Wednesday 12 December were held in the newly-restored Great Hall at the Mile End campus and predominately attended by postgraduate students, accompanied by more than 2,000 of their family and friends.

Professor Marcus du Sautoy was named Honorary Doctor of Science by Professor Shahn Majid of Queen Mary’s School of Mathematical Sciences. Marcus du Sautoy is a TV and radio presenter, author, writer for the UK’s leading newspapers, the Charles Simonyi Professor for the Public Understanding of Science and Professor of Mathematics at the University of Oxford and a Fellow of New College. He has lectured at Queen Mary on several occasions, including the First Drapers’ Lecture (2006) and the flagship William Harvey Day in 2010.

Professor du Sautoy says: “Queen Mary was the springboard for my career as a grown-up mathematician. Having completed my DPhil at Oxford, my first year as a post-doc was spent in the extremely stimulating environment of the mathematics department at Queen Mary. Since that time I have kept in contact with many of the mathematical friends I made during my time at the university. It is a great honour that Queen Mary has decided to recognise my contributions to mathematics and science with this award.”

Novelist and Queen Mary alumna Sarah Waters has received an Honorary Fellowship, presented by Professor Margaret Reynolds of the School of English and Drama. “I am absolutely thrilled to be receiving an Honorary Fellowship from Queen Mary,” she says. “I have many happy memories of my time as a postgraduate student at the university, and the academic work I did there was very much the starting-point of my career as a novelist. This award therefore feels very special to me. It's a huge treat and honour.”

Waters studied English Literature at the Universities of Kent and Lancaster and received her PhD from Queen Mary with a thesis titled Wolfskins and Togas: Lesbian and Gay Historical Fictions, 1870 to the present. Her books are largely set in the Victorian era and feature lesbian protagonists. They include the Betty Trask Award winning Tipping the Velvet (1998), Affinity (1999) and the Orange Prize and Man Booker Prize nominated Fingersmith (2002). The Night Watch (2006) and The Little Stranger (2009) were also shortlisted for the Man Booker Prize.

Professor Simon Schama has been awarded an Honorary Fellowship by Professor Quentin Skinner of Queen Mary’s School of History. Simon Schama is Professor of Art History and History at Columbia University, a writer and broadcaster for the BBC and a contributing editor to The Financial Times. He has previously held posts at Cambridge, Oxford and Harvard.

Professor Schama has won a number of prestigious awards for his writing, including the Wolfson Award for History; the W H Smith Prize for Literature; the National Academy of Arts and Letters Award for Literature; and the National Book Critics’ Circle Award for Non-Fiction for Rough Crossings: Britain, the Slaves and the American Revolution (2006). As an essayist and critic for The New Yorker, his essays have been collected in a number of volumes. His television work includes the Emmy-nominated A History of Britain and Emmy-winning Power of Art. His most recent project, Simon Schama’s Shakespeare, was aired in June 2012. Professor Schama recently spoke at one of the events that launched Arts Two, Queen Mary’s new humanities building at Mile End.