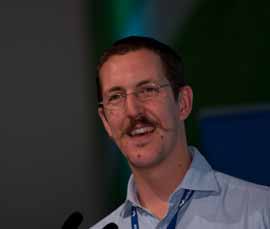 Ben Hammersley will discuss 'The past, present and future of East London Tech City' in a free event organised by the College’s Mile End Group.

An author, journalist and government advisor, Hammersley specialises in digital and IT innovations and how they affect culture, the economy, and politics. He is also editor-at-large of technology news magazine, Wired.

Stretching from the vibrant districts of Old Street and Shoreditch in east London to the Olympic Park in Stratford, Tech City is the largest hub for creative and digital technology companies in Europe.

In just three years, it has expanded from around 15 entrepreneurial start-ups to over 600 digital companies – growth that is set to continue with UK Government support. Google, Cisco, Vodafone, Intel and Facebook have all recognised the unique opportunities the area provides.

In addition to advising governments and businesses on digital developments, Hammersley is one of four members of the European Commission’s High Level Expert Group on Media Freedom.

As a writer, Hammersley has penned five books on internet technologies. He also pioneered multimedia reporting for the BBC while corresponding from Turkey - being the first to report for television, radio, Twitter, YouTube and Facebook equally.

“This event highlights Queen Mary’s position as the world-class university at the heart of Tech City, the UK’s Silicon Valley,” said Dr Jon Davis, Director of the Mile End Group, “with many of the 1,000 students from the burgeoning School of Electronic Engineering and Computer Science engaged in internships and employment through several high-profile start-up firms.”

Set up nearly 10 years ago as an informal discussion group for postgraduates of contemporary political history at Queen Mary, the Mile End Group has evolved into a seminar series attracting top speakers with inside knowledge of government and Whitehall.