One of Spain’s most influential directors Oscar winning Pedro Almodóvar was interviewed by a Professor of Theatre and Screen Arts Maria Delgado on 13 December 2012. 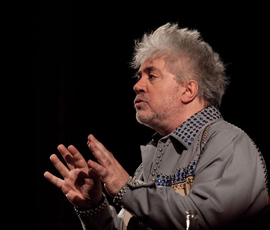 Professor Delgado from the university’s School of English and Drama, who also writes on Spanish culture, undertook a public interview and introduced film clips with Almodóvar at an event to celebrate the film-makers ground-breaking career, hosted by the Academy of Motion Picture Arts and Sciences (AMPAS) at the Curzon Soho Cinema.

This is the second time in a month that Professor Delgado has interviewed the director. She said: "It was a great honour to interview Pedro, and to work with him and his production company on these two celebratory events. Nobody makes films quite like Almodóvar and on both occasions he was able to share revealing information on how he works with actors and crew on shaping his remarkable films.”

Pedro Almodóvar made a name for himself on the world stage with his penchant for bright colours, labyrinthine narratives and bold splashes of melodrama. His films, including "Matador" and "Volver" are notable for their strong female leads and his long-term collaborations with actors such as Carmen Maura, Victoria Abril, Penélope Cruz and Antonio Banderas.

In 1999 Almodóvar's "All about My Mother" won the Foreign Language Film Oscar, and in 2002 "Talk to Her" earned him a directing nomination as well as an Oscar for Original Screenplay.

Professor Delgado also interviewed the director in November at the 2012 David Lean Lecture. 'The Cinema Inside Me' talk, took place the form of a conversation between Almodóvar and Professor Delgado. Following the talk actor Miranda Richardson presented Almodóvar with his BAFTA for “The Skin I Live In”, which he had been unable to collect at the 2012 BAFTA Film Awards.

Queen Mary’s School of Drama is one of the country’s leading centres for the study of theatre and performance. It’s top-rated internationally-recognised research feeds into innovative teaching by people who are passionately engaged with their subject.