A consortium of three arts organisations based in London and Manchester has been selected to receive a major grant from the Calouste Gulbenkian Foundation for the creation of a UK cultural festival of young people's ideas. 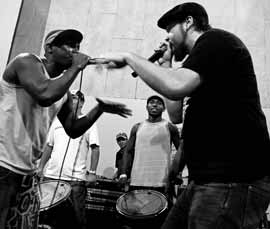 ,This will draw inspiration from the research that People's Palace Projects has been developing with Agência Redes para a Juventude (the Youth Agency Network) in Rio de Janeiro. Their proposal was chosen from an excellent shortlist of ideas put forward by UK-based companies. The successful team said: "This project is about young people, creativity and our future. It is an adventure into the unknown."

People's Palace Projects (PPP - an arts research centre at Queen Mary, University of London) in partnership with Contact, Manchester and Battersea Arts Centre (BAC) will establish Agência UK, involving up to six urban hubs across the UK. A sustained period of R&D involving some 300 young people aged 15 to 25 years in the creative process will culminate in a four-day cultural festival of young people's ideas over the Easter weekend of 2015.

Worth £175,000, this grant forms part of an evolving programme led by the Calouste Gulbenkian Foundation. The programme was piloted in 2010 through support for two projects developed by Manchester International Festival - Sacred Sites and That Day We Sang. National Theatre Wales was the next recipient, in 2011, for an idea brought to the company by four young Somali men from the Butetown area of Cardiff who were eager to change negative perceptions of their nation. The eventual performance of De Gabay, which draws on Somali poetry and music, will take place in 2013.

The Gulbenkian's participatory performing arts programme supports the development of a new performance piece of uncompromising quality which brings together leading professionals and people from local communities, with demonstrable social and cultural benefits. As a European foundation, based in three countries, Gulbenkian is also keen to encourage greater international exchange.

Andrew Barnett, director of the Calouste Gulbenkian Foundation UK Branch, said:
"It has been a challenge to select one project from the best of those involved in participatory performance. We were attracted by the fact that this project arises from an international partnership which will offer young people opportunities to take the lead in giving voice to their aspirations. Our hope is that this exchange of ideas will embolden practitioners to develop new ways of working that will both enrich theatre practice and enhance the lives of the young participants."

David Jubb, Joint Artistic Director Battersea Arts Centre, said:
"At a time when there are over 1 million young people unemployed in the UK, at a time when costs in education are rising beyond the reach of many, at a time when we need to invent new social, economic and environmental models…it is precisely the right time to invite and support young people to develop their own ideas in their own communities. We are delighted to have this opportunity in partnership with Contact, PPP and Faustini. It is a rare and visionary fund that supports an R&D process and sees what it can achieve and so it is great to be doing this in partnership with the Gulbenkian Foundation."

Suzie Henderson, Creative Producer at Contact said:
"We are thrilled to receive this grant which will allow us to develop a new creative model for young people that can be rolled out nationally. We are delighted to be developing this work in partnership with Battersea Arts Centre, People's Palace Projects and Marcus Faustini and are excited to see the impact of this work in the communities of North Manchester, Battersea and across the country."

Paul Heritage, People's Palace Projects, said:
"Art transforms lives. This major grant from the Gulbenkian Foundation will make it possible for young people across the UK to use the arts to bring about the changes they want to make in their own communities. Inspired by the radical social technologies for the arts in Brazil, this partnership between BAC, Contact, PPP and Marcus Faustini's Youth Agency Network will enable young people to make art matter."

Marcus Faustini, Youth Agency Networks, said:
"This is a great boost to the work of Youth Agency Networks and its radical aesthetic approach. We mobilise individuals in Rio to take action in their life and in their neighbourhood. The grant will widen this network by creating interactions between underprivileged young people from Brazil and the United Kingdom."