Olympic visitors descending on the capital can explore the East End’s colourful history with a new audio tour, with academic commentary from Queen Mary, University of London. 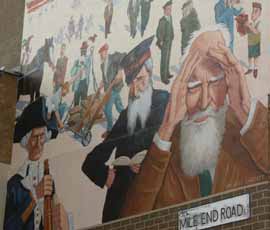 TV historian Amanda Vickery is among the experts to lend their research, knowledge and voice to the free audio guide, which charts over 300 years of east London’s fascinating past.

The route runs from Liverpool Street Station, on to Spitalfields, up Brick Lane, along Whitechapel Road to Stepney Green tube station. With 12 stops, it takes around one hour to complete.

At each stop, listeners hear two to three minutes of audio on significant sites, events and figures such as the infamous Jack the Ripper who have shaped East End life over the centuries.

Key points of interest include:

The guide aims to be a popular resource for Olympic tourists, local residents and school pupils, and new university students coming to the area.

“With the Olympics almost upon us and the east of London about to become the focus of the world, the audio tour highlights the global significance of the East End, past and present, and brings our world-class research to a wider audience,” explains Professor Peter McOwan, Vice-Principal for External Relations and Public Engagement at Queen Mary.

Listeners can download the audio tour from the Queen Mary website to their MP3 player or smartphone, as a series of MP3/M4a files: www.qmul.ac.uk/eastendtour. Alternatively it can be watched on Youtube.

A narrator guides visitors from stop to stop, while oral history recordings and illustrative readings add colour to the academic insight. A PDF route map and directions can be downloaded and printed out to accompany the audio experience.