Wildlife in trouble from oil palm plantations, according to scientists

Forest fragmentation driven by demand for palm oil is having a catastrophic effect on multiple levels of biodiversity, scientists from Queen Mary, University of London have discovered. 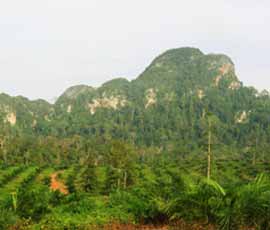 Oil palm plantations are having a devastating effect on biodiversity. Photo by Matthew Struebig.

The researchers are worried that unless steps are taken to safeguard and manage the remaining forest, then certain species will struggle to survive.

The study, which focused on bats as an indicator of environmental change, was published in one of the leading scientific journals, Ecology Letters.

The team conducted bat surveys in pristine forest and also in forest patches of varying size in central Peninsular Malaysia. They recorded the numbers of different species present and also assessed the level of genetic diversity within populations of some species.

Lead author Matthew Struebig, jointly based at Queen Mary University of London and the University of Kent, said: “We found that smaller forest areas support fewer species, and that those species that remain face an eventual decline, potentially leading to local extinction in the long-term.”

When the team compared the number of species present to genetic diversity within populations they found that fragmentation appeared to have an even greater impact on genetic loss, which might also be important for long-term population viability.

“We found that in order to retain the numbers of bat species seen in pristine forest, forest patches had to be larger than 650 hectares, however to retain comparable levels of genetic diversity, areas needed to be greater than 10,000 hectares,” he said.

Co-author Stephen Rossiter, also at Queen Mary, emphasised that the findings could have important implications for forest management in the face of the ever-growing demand for oil palm plantations.

He said: “We found that while more species existed in larger forest patches, even small fragments contributed to overall diversity. Therefore, conservation managers should aim to protect existing small fragments, while seeking to join up small forest areas to maximise diversity.”