British born astronaut, video game pioneer, and entrepreneur Dr Richard Garriott de Cayeux will be describing his journey from computer games to outer space at a public lecture on ‘Fantasy and the Final Frontier’ on Wednesday 14 December 2011. 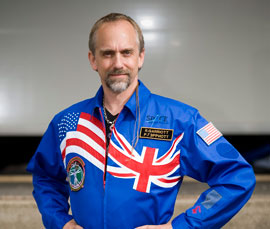 Richard is an award-winning computer game developer, entrepreneur, philanthropist, adventure traveller and space explorer. His passion for exploration has taken him from underwater explorations of the Titanic to hunting meteors in Antarctica. In 2008 Richard realised a lifelong dream by visiting the International Space Station.

In this year’s Queen Mary Science Communication lecture, Richard will be explaining how “the quest is not just to visit new worlds, but to permanently move humanity beyond earth.”

He commented: “The early space race inspired a generation to pursue careers in STEM areas; many of these ‘orphans of Apollo’ started the high tech boom of the 80s and 90s. Computer games were once the nerdy past-time heckled at by ‘normal’ people, but ‘nerds’ now rule over creative and business growth beyond what most any would have imagined. Now many of the Apollo Orphans are returning to the space race to finish what their fathers started.”

Richard will be also be giving a UK exclusive glimpse of his soon to be released new game, Ultimate Collector, at the lecture. Richard’s Ultima series of role-playing games, with themes of adventure, virtues and exploring portals to other worlds remains one of the most successful franchises in gaming history, and created the multiplayer game genre through the ground-breaking technology of Ultima Online.

Dr Garriott de Cayeux’s work has resulted in numerous awards including admission into The Academy of Interactive Arts and Sciences Hall of Fame and a Lifetime Achievement Award at the Game Developers’ Choice Awards. For his significant contribution to space exploration, he was awarded a Sir Arthur C. Clarke prize, and became a member of the NASA advisory council on space education. Richard was also awarded an Honorary Degree by Queen Mary in July 2011 for his work in science outreach with the College.

Professor Peter McOwan, Dean for Taught Programmes in the Faculty of Science and Engineering, commented: “Having Richard around at Queen Mary is always a pleasure, his inspirational stories and his amazing achievements show what a love of art and science combined with drive and determination can achieve.”

The lecture will be held in ArtsTwo Lecture Theatre, Queen Mary, University of London. E1 4NS on Wednesday 14 December at 6.30pm.

This event is free to attend, but you must book tickets online in advance if you wish to attend. Please click on this link to book your place now. If you have any questions please contact the Events Office via events@qmul.ac.uk or telephone 020 7882 5147.