Sexual orientation and gender conforming traits in women are genetic

Sexual orientation and ‘gender conformity’ in women are both genetic traits, according to new research from Queen Mary, University of London. 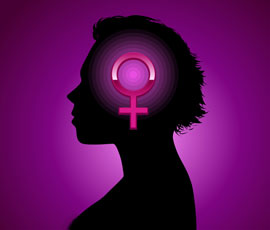 It is well recognised that there consistent differences in the psychological characteristics of boys and girls; for example, boys engage in more ‘rough and tumble’ play than girls do.

Studies also show that children who become gay or lesbian adults differ in such traits from those who become heterosexual – so-called gender nonconformity. Research which follows these children to adulthood shows that between 50 to 80 per cent of gender nonconforming boys become gay, and about one third of such girls become lesbian.

Writing in the journal PLoS One, Dr Andrea Burri and Dr Qazi Rahman from Queen Mary’s School of Biological and Chemical Sciences report that a shared set of genes and shared set of random environmental factors is partially responsible both for gender nonconformity and female sexual orientation.

The team followed a group of 4,000 British women who were one of a pair of twins. They were asked questions about their sexual attractions and behaviour, and a series of follow up questions about their gender nonconformity. In line with previous research, the team found modest genetic influences on sexual orientation (25 per cent) and childhood gender nonconformity (31 per cent).

Dr Qazi Rahman, co-author of the study, explains: “We found that there is a connection between these mental traits and how sexual orientation develops. One idea is that there is an association between these psychological traits and sexual orientation because they all develop under common biological drivers; like the development of brain regions under the influence of genes and sex hormones.”

Dr Rahman adds: “We think environmental factors and genetics drive other mechanisms, like exposure to sex hormones in the womb, to shape differences in gender nonconformity and sexuality simultaneously.”

Dr Rahman is mindful that the results may carry the risk of stereotyping, adding: “Stereotypes like ‘sissy’ or ‘mannish’ have not been helpful in promoting respect for gay people, and those who don’t match those stereotypes may find it hard to accept they are gay or lesbian."

But he believes the team’s findings are increasingly important to researchers concerned with the mental health of sexual minorities. Dr Rahman concludes: “We know that gay people who are strongly gender nonconforming report more anxiety and depression symptoms.