Queen Mary researchers taking part in the ATLAS particle physics experiment at the Large Hadron Collider in Geneva have released the latest results of their search for the elusive Higgs Boson. 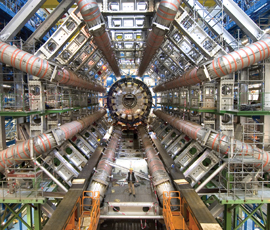 The Higgs boson is thought to be responsible for the origin of mass in the Universe, and is the last predicted particle of the ‘Standard Model’ of particle physics which explains how particles and forces interact.

The particle physics group at Queen Mary has been involved in the design and construction of essential components of the ATLAS apparatus, as well as analysis of the data.

Dr Eram Rizvi, from the School of Physics and Astronomy, explains: “A major goal of the LHC is to discover the Higgs, or an alternative responsible for the mass of fundamental particles. If the Higgs exists then only a narrow range of masses for the particle remains open. And if it doesn’t exist then the search for new physics will intensify. The particle physics community feels as if it’s on the cusp of finding something new.”

While the latest findings are a major step towards resolving this long-standing puzzle, the significance of the findings is not yet compelling enough to claim a discovery - there is still a 2-3 per cent chance that the fluctuations in the data are a statistical anomaly.

The LHC is set to continue operation in March next year after a scheduled winter maintenance shutdown.