Staff and students from Queen Mary, University of London’s ground-breaking public engagement programme will be among a select audience at a special event hosted by the All Parliamentary Space Committee at the House of Commons today. (Tuesday 13 December 2011). 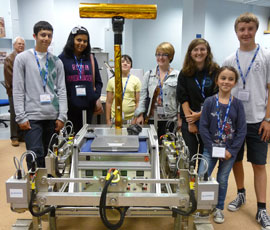 The Cosmic Futures competition – part of our Media Space programme - was run by Queen Mary, University of London in partnership with Venture Thinking and in association with Metro and CosmOnline. Launched in parliament this time last year, the competition was open to 8–18 year olds attending school or college in the UK. Students competed to win the opportunity to write and edit a new space science magazine, Ticket to Mars, which has been distributed to all UK schools. The project was funded by Queen Mary, University of London and through the UK Space Agency’s Space for All Grant.

Professor Peter McOwan, Dean for Taught Programmes in the Faculty of Science and Engineering, commented: “Queen Mary is proud to give these students the chance to explore the opportunities science and engineering can offer them. Through our commitment to outreach we hope that some of these students may be inspired to follow Richard Garriott de Cayeux’s footsteps into space. The winning students are sharing the magic of space and science and engineering through this professional publication.”

Rebecca Hayward, aged 10 from Birchanger School, Essex was one of the students who took part. She said: “I loved every minute of Cosmic Futures. I had an amazing time. I've now become editor of the school magazine and I'm featuring lots of stories about space in it.”

Heather MacRae, Director of Venture Thinking, noted: “This project is one of the biggest and best initiatives in our Media Space programme which aims to combine creativity with science and engineering knowledge. Students had the opportunity to work alongside Ben Gilliland from the Metro, Designer Lydia Thornley, and scientists and engineers from Astrium. Media Space has evolved over the past four years and this year we had one of our first Media Space students mentoring the younger students.”

British-born space entrepreneur Dr Richard Garriott de Cayeux spent ten days onboard the International Space Station in October 2008, during which time he performed a range of important scientific studies. He was awarded an honorary degree by Queen Mary in 2011.

Adam Afriyie MP, Chair of the Parliamentary Space Committee, commented: “These are exciting times for UK space. This reception demonstrates the enormous inspiration space provides to young people studying science at school and embarking on a science career. I hope that the Cosmic Futures competition will give a boost to aspiring UK astronauts."