Professor Peter McOwan, Dean for Taught Programmes in the Faculty of Science and Engineering, has been awarded the prestigious Mountbatten Medal for his excellence in communicating computer science to diverse audiences. 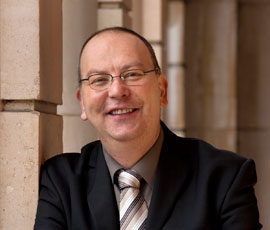 The Mountbatten Medal celebrates individuals who have made an outstanding contribution, over a period, to the promotion of electronics or information technology and their application that benefits the UK.

Nominations are judged by representatives of the IET, the British Computer Society and the Royal Academy of Engineering, and can be within the spheres of science, technology, industry or commerce and in the dissemination of the understanding of electronics and information technology, whether to young people, or adults.

Linda Deleay, Awards and Prizes Manager at the IET, commented: “Professor McOwan was the unanimous choice of all three bodies for the 2011 Mountbatten Medal due to his excellence in the communication of computer science. Professor McOwan strongly deserves this award, given his history of public engagement.”

Professor McOwan received his award at a Gala Dinner on 10 November 2011. He said: “I am delighted to be awarded this medal. Computer Science makes so many contributions to the world around us, and it’s great to be able to show it. This award is really a team effort, and I’d like to thank my colleagues on the cs4fn project, Paul Curzon, Jonathan Black and Chrystie Myketiak for their support and creativity.”

Speaking at the awards presentation, Dr Mike Short, President of the IET, added: “Peter is an inspirational example of how an active researcher can also be an effective communicator, stressing the importance of ‘research stories’ to provide engaging and widespread societal impact to enthuse the next generation to follow careers in computing and technology.”