A revolutionary digital stethoscope to help GPs spot the first signs of heart disease is being developed with the help of a team from Queen Mary, University of London. 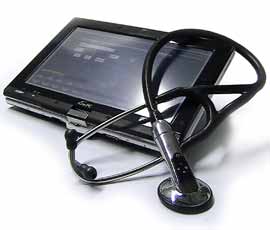 Professor Mark Plumbley from Queen Mary’s School of Electronic Engineering and Computer Science led the group which developed the computer-based technology to synchronise sounds from the new stethoscope with a human heartbeat.

The resulting analysis of the sounds (using an existing technique called ICA*) and graphical representation of the heartbeat is able to show any anomalies, giving GPs who aren’t experts in cardiac care a greater ability to spot heart disease in their patients.

Professor Plumbley said: “Heart disease is still the UK’s number-one killer. Our work here is making a vital contribution to an invention that will help GPs identify heart problems before they become serious – even when patients come to surgery about a totally unrelated health matter. Early interventions not only help patients but also reduce the burden on healthcare resources.”

The new stethoscope, called DigiScope, is able to capture four heartbeat sounds one after the other, like a regular stethoscope. The technology developed by the Queen Mary team can transform the separate sounds into one which is integral for ICA to process.

The technology was unveiled at the 36th International Conference on Acoustics, Speech and Signal Processing in Prague on 25 May and funded by the Engineering and Physical Sciences Research Council.

The DigiScope will be ideally suited to outpatient clinics, accident & emergency units and other hospital departments where doctors are not necessarily cardiac specialists.

The DigiScope can be used by doctors in exactly the same way as they use a conventional stethoscope. They position the end piece, in turn, on four different places on the patient’s chest.

However, with the DigiScope these four separate sounds are then transmitted wirelessly to a laptop or desktop and synchronised by the new technology as if they were all transmitted simultaneously.

The stethoscope development project is an international collaboration led by Portugal’s University of Porto and Centro Hospitalar Alto Ave, Guimarães.

“It’s the multidisciplinary character of this exciting international collaboration that has enabled it to produce such a promising outcome,” says Professor Plumbley.

“Two prototype DigiScopes are already in use to test their capabilities. The development will not remove the need for specialist cardiac units; it will simply make it easier to identify potential heart problems at an earlier stage.”

*ICA, otherwise known as independent component analysis, is an existing technique which can only analyse heartbeats if they are presented as one sound.