A new plant species is providing an insight into how evolution works and could help improve crop plants, scientists have revealed. 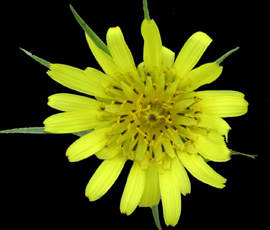 The new plant species, Tragopogon miscellus, appeared in the United States 80 years ago. It came about when two species in the daisy family, introduced from Europe, mated to produce a hybrid offspring.

The species had mated before in Europe, but the hybrids were never successful. However in America something new happened. The number of chromosomes in the hybrid spontaneously doubled, and at once it became larger than its parents and quickly spread.

Scientists studied the Tragopogon miscellus to understand how evolution works.

“We caught evolution in the act,” says Doug Soltis, co-leader of the research team. New and diverse patterns of gene expression may allow the new species to rapidly adapt in new environments.

Crossing different plant species to produce hybrids is a process used in farming to produce greater yields and stronger plants. Studying how this works in nature can give us new ideas to apply to agriculture.

Patterns of gene expression were examined in the new species, its parents, and newly made hybrids between the parents.

“What we found was a surprise,” says Richard Buggs, lead author of the paper and Research Fellow at Queen Mary University of London. “It’s as if hybridisation and chromosome doubling hit a re-set button on gene expression, turning them all on; this could allows subsequent generations to experiment by switching off different genes.”

Pamela Soltis, distinguished curator at Florida Museum of Natural History said: “An amazing diversity of gene expression was found among individuals within populations of this young species, even though they originated just 40 generations ago from a single cross. This could be part of the secret of the species’ success.”

To retrace the evolution of the new species, the scientists re-made the species in the greenhouses at University of Florida, by crossing the two parent species: Tragopogon dubius and Tragopogon pratensis.

“The hardest part was getting the chromosome number to double,” says Jennifer Tate from Massey University in New Zealand. “But the re-synthesised species looked exactly like the natural one.”

Doug Soltis from the University of Florida said: “Hybridisation and chromosome doubling have played a major role in the evolution of flowering plants, and Tragopogon miscellus gives us an amazing window into this process.”

Many crops species underwent hybridization and chromosome doubling during their domestication.

“Understanding the impacts this process has on genome structure may help understand how best to breed crops for high and stable yields,” says Pat Schnable, Director of the Center for Plant Genomics at Iowa State University. “A recently arisen natural polyploid such as Tragopogon can give us unique insights into the early stages of this process.”