Mother and kid goats recognise each other’s calls soon after the mothers give birth, new research from Queen Mary, University of London reveals. 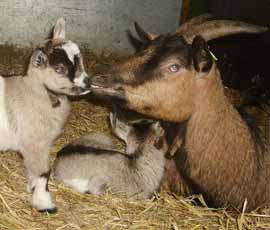 The study, published in the journal Animal Cognition, measured the individuality of the goats’ calls and the ability of goats to recognise the individual differences.

Scientists Dr Elodie Briefer and Dr Alan McElligott from Queen Mary’s School of Biological and Chemical Sciences found that mother and kid goats react more to the calls from their own kids and mothers than they do from other goats they know.

Dr Briefer said: “Goats in the wild have an antipredator strategy called ‘hiding’ where the young stay hidden in vegetation during the first week after being born to avoid being detected by predators.”

“As hiders are isolated, they don’t move around a lot and are mostly silent to avoid detection from predators, we thought kid calls would not necessarily be individualised and therefore not easy to recognise.”

Dr Briefer and Dr McElligott measured the individuality of calls and the vocal recognition during this ‘hiding’ phase (one week old) and later on after they had joined the social group, at five weeks old. The research was carried out at White Post Farm, Nottinghamshire, UK.

“Studying the link between vocal signals and species ecology can help us understand how animal communication evolves,” Dr Briefer said.

“We were surprised when we found that even at one week, both mothers and kids react more to calls from their own kids and mothers than those from other familiar goats.

“The ability of goats to recognise each other’s calls and respond appropriately suggests some robust mechanisms of memorisation and recognition in goats.”