A new study of the lakes in and around Chernobyl’s fallout zone reveals that radiation from the nuclear accident appears to have had no long term effect on the abundance or diversity of aquatic animal life. 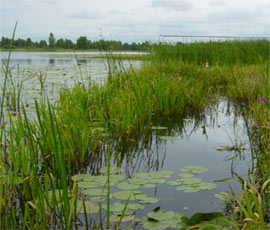 The study, which coincides with the 25th anniversary of the Chernobyl disaster, examined invertebrate animals, such as insects, snails and crustaceans, living along the shores of eight lakes.  Levels of radiocaesium in the lakes ranged from near-background levels at 0.1 microGrays per hour, considered normal, to around 300 times higher.

No evidence was found that the abundance or diversity of the animal communities was influenced by direct contamination from the Chernobyl accident.  Indeed, the most contaminated lake, Glubokoye, 6.5 km north of the nuclear power plant, supported the most animal diversity of those lakes studied.

The findings are published in the Journal of Environmental Radioactivity by Dr John Murphy from Queen Mary, University London, Dr Jim Smith from the University of Portsmouth, and Dr Liubov Nagorskaya of the National Academy of Sciences of Belarus.

The results of the lake-based research are significant because they contrast with previous studies of the region’s land-based and flying insects which reported a significant negative impact associated with radiation from Chernobyl.

Dr Murphy said:  “Our study found no evidence that radioactive contamination from the Chernobyl accident has had a direct influence on the lakes' aquatic invertebrates.  We discovered over 230 species some of which are rare and endangered and even species that are thought to be particularly susceptible to high levels of radioactive contamination, such as freshwater snails, showed no response.

“This indicates that, twenty five years on, the radiation has not had a perceptible affect on the diversity and abundance of the region’s lake invertebrates.”

The study may have significant implications for the long term affects of the recent nuclear accident at the Fukushima power plant in Japan, where scientists are already monitoring levels of radiocaesium in a lake in the village of Iitate 40 km to the northwest.  Dr Smith suggests that long-term radiation dose rates to organisms there could be similar to those seen in some of the contaminated Chernobyl lakes.

Dr Smith said: “Whilst recent estimates by the Japanese authorities show that the radioactive releases to the air at Fukushima were about ten times less than Chernobyl, there are high levels of radiocaesium fallout to land in some areas to the northwest of the power plant.”

The scientists examined samples from the lakes, situated in Belarus and the Ukraine, over a two year period and found that they contained a range of diversity typical for the region.

Dr Murphy said: “Studying aquatic invertebrates is a valuable and well-established method of measuring effects of pollution on freshwater environments because they generally complete their entire life cycle in or close to water and thus reflect conditions in the water body over the preceding months.”

Dr Smith added that:  “Estimating the radiation dose to organisms inevitably involves a degree of uncertainty since their exact habitat is imprecise and varies with their life cycle.  However even taking this into consideration, the results suggest that natural environmental factors, such as lake size, and hydrochemical factors are the main drivers of biodiversity in the lakes.”

The study did not examine possible genetic or physiological responses of organisms at the individual level however the scientists said such effects could not be ruled out.

"Regular monitoring of the freshwater habitats in the affected regions around Chernobyl and Fukushima would greatly help our understanding of how nature responds to such radioactive contamination events," Dr Smith said.

The study was carried out while both Dr Smith and Dr Murphy were based at the Natural Environment Research Council Centre for Ecology and Hydrology (www.ceh.ac.uk).