Labour or Conservative? It’s all in the eye of the beholder

Scientists have uncovered specific facial characteristics which make MPs look like they belong to one of the two major political parties in Britain. 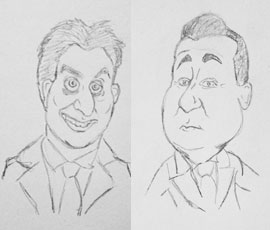 Labour MPs have broader smiles, dimples and a rounder, softer face than their Conservative counterparts, according to research from Queen Mary, University of London and UCL (University College London) published today (5 October 2011).

The study* involved a small group of people rating images of 90 male backbench MPs on whether they thought they were Labour or Conservative on a scale of one to six; one being definitely Labour and six definitely Conservative.

The participants were unable to correctly distinguish political affiliation from the images. Their perceptions, however, of whether an MP looked more Labour or Conservative, were then used to create computerised caricatures of the ‘perfect’ MP for each of the respective parties.

The new conceptualised faces were then independently assessed by almost 70 other people and the majority correctly identified the caricatured Conservative MP’s face, which had a longer nose bridge and a darker area below his eyebrows.

Professor Peter McOwan from Queen Mary, University of London said: “In 2010, studies in the US showed people could tell political allegiance simply from a politician’s face; however our study shows that with current UK politicians this is not the case.

“By applying state of the art image processing and statistical analysis to blend together the faces people thought looked Labour or Conservative, and computer enhancing the distinguishing features as a political cartoonist might, we were able to create ‘typical’ party faces people could more easily categorise.

“It would seem that in a political world where there is an increasing focus on a politician’s looks, the public still seems to have a perception about what they expect; they still have a built-in face identikit for our main parties.”

Professor McOwan then added, somewhat humorously, “Maybe the political parties could use an identikit to help them choose their next electoral candidates?”

Researcher Tom Roberts from UCL said: "The idealised faces serve as a template of how we might imagine Labour and Conservative politicians to look. One interesting question is: to what extent are these faces constructed from our own socioeconomic status and the many different faces we see every day, or is there a genetic link between facial shape and political stance?

*There were 19 participants in the initial study, nine of which were female and all were predominantly Labour supporters. The independent assessment from 67 people of the ‘perfect’ images shows that the relatively small number of participants and their political affiliation did not impact on the results of the study.