Researchers from Queen Mary, University of London have launched a new iPhone app which tells people how happy people are around them, and what they are happy about. 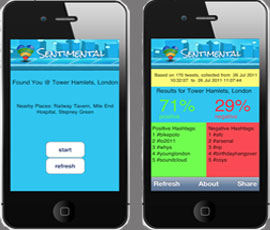 Dr Battersby explains: “The application makes use of GPS, wifi location and cell tower information in order to detect where the user is. This information is used to query Twitter in real time and pull in recent textual status updates, known as tweets, from people within a two mile radius.”

Sentimental collects publicly available tweets, meaning users of the application do not need to have a Twitter account themselves. The app then uses Chatterbox's sentiment analysis engine to detect the emotional content of the tweets - including positive and negative sentiment - and inform the user which topics (or Twitter hashtags) are most associated with which sentiment.

In contrast to existing data (such as surveys and opinion polls) the data provided by Sentimental is unbiased and provided in real time. Chatterbox’s sentiment detection technology also makes use of language models trained on previous Twitter data, and on Twitter users’ own indications of their emotions. This enables it to overcome some major existing problems.

Dr Purver explains: “By learning from Twitter users themselves rather than looking for keywords defined by an analyst, the software can automatically understand the idiosyncratic language, misspellings, hashtags and emoticons that tweets regularly feature.

Professor Peter McOwan is CEO of QApps, and Dean for Taught Programmes in the Faculty of Science and Engineering, he added: “We are delighted to be working with Chatterbox on the Sentimental app - this is just the sort of project that QApps was created to support.”

Sentimental has been launched in the United Kingdom, with other countries to follow shortly, and is available from the app store, and via the Chatterbox and QApps websites: http://www.cbanalytics.co.uk/apps/sentimental/ and http://www.qappsonline.com