Scientists from Queen Mary, University of London have discovered a new way of detecting zinc in zebra fish, that could pave the way for furthering our understanding of diseases like type 2 diabetes, prostate cancer and Alzheimer’s. 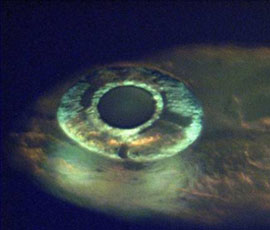 The results will be announced today (3 July) at the Sixth International Symposium on Macrocyclic and Supramolecular Chemistry, in Brighton.

Zinc is found throughout the body and involved in many metabolic pathways that affect the function of the immune system and brain, reproduction, and sexual development. Zinc is also increasingly recognised as a key element in the treatment of a range of diseases, for example type 2 diabetes, prostate cancer and Alzheimer’s disease.

It’s unclear whether zinc is a cause of disease, or if it’s employed to prevent its development or progression, and there is great interest in developing a molecular probe which can detect zinc in the body. While a lot of work has been done in vitro, very few people have looked at how zinc works in whole organisms.

In this new study, Professor Mike Watkinson, Dr Stephen Goldup and Dr Caroline Brennan, from Queen Mary’s School of Biological and Chemical Sciences, have focused their efforts on the development of a sensor for zinc to be used in studies on zebrafish (Danio rerio). Due to their fast development, zebra fish can be grown outside the mother’s body, and their embryos are transparent, allowing for a clear observation of their organs.

The team designed a sensor which switched on fluorescence in the fish when zinc was present. Professor Mike Watkinson explained: ”Our probe is able to visualise zinc in various parts of the fish embryos, including the pancreas, and we are excited that we can develop the technology further to help understand the role of zinc in the development of important disease like Type 2 Diabetes.”

The team used a technique called ‘click’ chemistry, which is designed to generate substances quickly and reliably by joining small units together.

The sensor was found to be particularly sensitive to identifying zinc rather than other anions such as iron or copper, and it is hoped that with further development the technology can be used by other scientists working in these important fields.