The science behind invisibility and magic tricks and inviting people to create their own music patterns are some of the highlights that Queen Mary, University of London researchers will bring to this year’s British Science Festival. 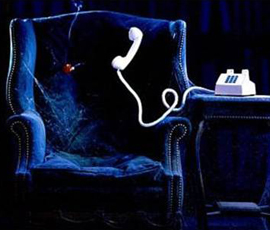 The festival, starting this weekend in Bradford, has honoured Dr Akram Alomainy from Queen Mary’s School of Electronic Engineering and Computer Science, with an Isambard Kingdom Brunel Award Lecture.

Dr Alomainy, who will present The Magic of Harry Potter! Can We Make Cloaking A Reality, is one of five professional scientists in the early stages of their career to be chosen to give an Award Lecture at this year’s festival. The popular lectures aim to promote open and informed discussion on issues involving science.

Dr Alomainy will discuss how electronic engineers can apply their physics and engineering skills to create materials which can make objects invisible. He said: “Invisibility was once contained in the pages of fiction books. Now, with the excellent research led by Professor Yang Hao and the innovative research team at Queen Mary’s School of Electronic Engineering and Computer Science, invisibility could become a reality.

“The applications of such technology could range from advanced military solutions to efficient sensing for healthcare and medical treatments.”

He said: “It’s fitting Akram was recognised with an Award Lecture at the festival. He has made outstanding contributions to his field at such an early stage in his career and is very talented in explaining his research to a wider audience.”

Professor McOwan is no stranger to using skills to transform research into a more accessible format and will also play his part at the festival.

His magic shows, performed with Queen Mary's resident stand-up comedian Matt Parker, will unveil how mathematics and computer science can be used in magic tricks. “The science and mathematics behind some of the tricks I’ll be performing are almost as interesting and exciting as the tricks themselves,” Professor McOwan said.

The magic shows will feature tricks from his latest project Illusioneering, and include cutting a person in half with ropes. The project, which enables students and teachers to perform magic tricks based on cross-curricular Science, Technology, Engineering and Mathematics fundamentals, is already popular amongst British schools.

The festival magic shows are scheduled between 3.30pm and 5pm on Saturday 10 September and Sunday 11 September.

Another key highlight on the festival agenda will be Dr Samer Abdallah’s exhibition The Melody Triangle where people can use their body movements to explore a spectrum of musical patterns.

Dr Abdallah, accompanied by research student Henrik Ekeus, from Queen Mary’s Centre for Digital Music (C4DM) will help people learn how the predictability or unpredictability of patterns of notes determines their musical effect, and why one pattern of notes might seem more interesting or melodic than another.

The exhibition will run during the After Dark: Senses evening programme of the festival, between 7pm and 10pm on Wednesday 14 September.