Dozens of students from Queen Mary, University of London, descended on Regent’s Canal this week for a major clean-up operation on the litter-strewn waterway. 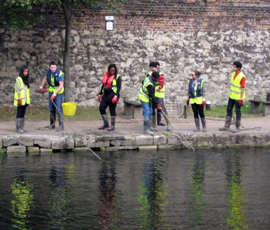 Students clearing litter from the canal

October 12 saw the first of several events for Queen Mary students to help clean up the local landmark. It accompanies an awareness campaign for students and residents to highlight the scourge of littering and its impact on wildlife.

The volunteers removed duckweed and mountains of litter, using hooks on sticks to dredge for a shopping trolley, a bike and other large items. A Polaroid camera was among the more unusual items pulled from the water.

The project was organised by Thames21, London’s leading waterways charity, in conjunction with Provide, the Queen Mary Students’ Union volunteering network, and the University’s Language and Learning Unit.

Rubbish has been building up on the canal for months, creating an eye sore on a beauty spot. Rita Serra, Thames21’s East London coordinator, believes that this is largely due to the high number of takeaway shops around Mile End and an insufficient number of bins available to dispose of waste.

Over 40 International Foundation Programme students – who are spending a year at Queen Mary preparing for an undergraduate degree - volunteered at the first event, with 50 more set to don gloves and fill bin-bags next week.

Rita Serra said: “We want everybody to be able to use and appreciate their local waterway; spaces such as the Regent’s Canal are a real asset to the community. We are hoping that with the strong involvement of residents and students, we can start to influence behaviour change and reduce the amount of litter that enters the canal in the first place.”

Future events are being planned to keep the canal rubbish-free with students putting forward ideas on how to keep the campaign going.

Sarah Gifford, Queen Mary Students’ Union’s Volunteer manager commented: “Volunteering is a great way for students to get involved in their local community and make a real impact, with many other personal benefits too. The clear up on the Regent’s Canal is a real quick and easy way to make a visible change to the local area, and for students to take responsibility for the canal next to the campus.”

“Provide volunteers help to clear the canal and towpaths with Thames21 around three times a year, and this will be increasing this academic year to include awareness campaigns on campus around litter disposal with Queen Mary Students’ Union support.”

After his afternoon clearing rubbish, Anoud Said Abu Odeh, a pre-undergraduate student from Qatar said: “As cliched as it may sound, the experience was truly rewarding. It felt good to give back to the community. It was extremely shocking to discover all the various items that people throw into the canal. This can be our way of apologising to mother nature.”

Thames21 is an environmental charity which works across London to improve rivers and canals for people and wildlife. It mobilises thousands of volunteers every year to clean up waterside “grot-spots”, remove graffiti and create new habitats for wildlife. Last year, more than 9,000 volunteered their time to the cause.

The Regent’s Canal runs from the Thames at Limehouse to its junction with the Paddington arm of the Grand Union Canal, passing through Mile End, Bethnal Green, under Islington, through Camden, alongside Regents Park and through the middle of London Zoo. Built in the early 19th century for the shipping of goods to the Midlands, it is now a popular route for cyclists and joggers.