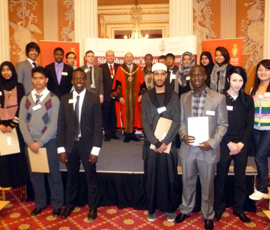 The 2011 scholarship winners at Mansion House

The Sir John Cass’s Foundation Lord Mayor’s Scholarship Programme is open to undergraduates aged 25 or below from one of nine inner London boroughs, including Tower Hamlets, Hackney, Newham and Lambeth. Of the 18 students to be awarded scholarships this year from five different London universities, nine were from Queen Mary.

The grant winners have come from a variety of disadvantaged backgrounds, including being a registered carer for a parent while studying full-time and fleeing a war-torn country and arriving in the UK as a refugee. The grants will enable these students to meet the cost of their tuition fees and maintenance and will cover three years of undergraduate study.

First year Mechanical Engineering student Israa Mohran commented: "I am a student who believes that you must work hard to achieve your goals and I have practiced this belief throughout my years of study. Living in Hackney, which is a borough with statistics which show that not many young people come out with university degrees, I was even more determined to go to university and achieve my goals. This scholarship will help me realise my full potential and I am very grateful for being rewarded with it."

The successful students and their families joined Queen Mary’s Principal Professor Simon Gaskell, the Lord Mayor, the Chairman of the Sir John Cass’s Foundation Kevin Everett, and representatives from other London universities at the launch event on 28 October at Mansion House, the Lord Mayor’s headquarters.

Professor Simon Gaskell said: “The very high proportion of recipients who are Queen Mary students is testament to the very high quality of our student intake and to our commitment to welcoming students from non-traditional backgrounds."

The programme is funded by both the Sir John Cass’s Foundation, and the Lord Mayor’s Bear Necessities Appeal and will continue when Michael Bear leaves office on November 11.

The Foundation, which was established in 1748, is one of the largest independent educational foundations in the country. It has donated £336,000 of its funds toward bursaries this year.