A leading art historian from Queen Mary, University of London will explore the importance of smell in Renaissance drama in a major public lecture at Shakespeare’s Globe on Tuesday 11 October. 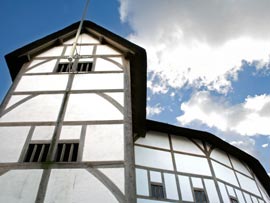 The 2011 Theo Crosby Fellowship lecture, entitled Scent on Stage, will be given by Evelyn Welch, Professor of Renaissance Studies at Queen Mary.

“We think of smell in a very different way than audiences did in Shakespeare's time,” says Professor Welch, recipient of the Globe’s Theo Crosby Fellowship 2011. “In the sixteenth century, perfume could kill or cure you. When the Queen of Navarre dies after inhaling the scent from a pair of perfumed gloves in Marlowe's play The Massacre at Paris, the episode is entirely believable.”

Professor Welch will talk about how smell and scents were understood, how everything from shoes to fans and jewellery were perfumed. “This helps us to understand how men and women who went to the original Globe theatre would have experienced the smells, good and bad, that surrounded them during the performance,” Professor Welch explains.

The Theo Crosby Fellowship is given each year in memory of the architect who helped the Globe’s founder, Sam Wanamaker, to articulate his vision for the International Shakespeare Globe Centre.

The 2011 Fellowship lecture takes place as part of Globe Education’s autumn events season, Shakespeare and the Banquet of the Senses.

The season celebrates the richness and variety of the senses with a mix of lively public and in-depth academic events which explore how Shakespeare’s contemporaries imagined the senses were crucial gateways to the external world.

Running from 9 October to 8 December, events include Festival of the Spoken Nerd, the opening event of the inaugural London Science Festival on 19 October; a series of public lectures by leading Shakespeare and Renaissance scholars exploring the relationship of the senses to culture, art and poetry; and a conference at the Globe bringing together distinguished academics and theatre practitioners for three days of lectures and practical experiments.

The season will culminate with Globe Education’s annual A Concert for Winter, when schools and community groups from Southwark will come together to make the Globe stage their own in a festive celebration of music and song.

Tickets for the Theo Crosby Fellowship lecture, Scent on Stage, cost £12 (£10 concessions) and can be booked via the Globe box office on 020 7401 9919 or online at www.shakespearesglobe.com.