A 93-year-old Philosophy student, a young mum with a daily commute of 500 miles to complete her degree and a visually impaired English Literature postgraduate are just some of the exceptional students graduating from Queen Mary, University of London, this week. 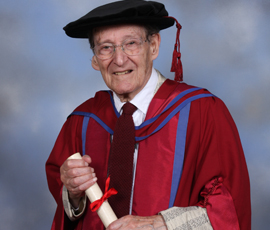 While all of Queen Mary’s students - 25 per cent of whom will be graduating with First Class Honours - should be proud of their achievements, these outstanding individuals have more reason than most to celebrate their success.

At the age of 93, Dr John North is one of the oldest ever students in the UK. He will be awarded a Doctorate of Philosophy following completion of his thesis Winckelmann’s “Philosophy of Art”: A Prelude to German Classicism, under the supervision of Professor Ruediger Goerner, Head of Queen Mary’s School of Languages, Linguistics & Film.

Dr North was born into a Jewish family in North-West Bohemia (now Czech Republic), in January 1918 - the same year World War I ended. After the annexation of Austria by Germany in 1938 he travelled as a student to London where he was classified as a “Friendly Alien” and not interned as other Jews with Austrian, Polish or Hungarian papers were. After three years in the Civil Defence in Bermondsey he spent a further four in the Royal Air Force, where he changed his name from Jan Neuberg to John North. Fearing atomic warfare in Europe he emigrated with his family to Chile after World War II, where he later joined British Overseas Airways Corporation (BOAC) as a project manager in their growing computer department, retiring in 1983.

Temporarily without a job as a new IBM computer was being installed at BOAC, he was encouraged by his Personnel department to start studying in his 60s. Inspired by evening classes in Archeology, he persuaded his manager to let him study the subject and obtained a Diploma in Archaeology and later an MA in Classical Civilisation from Birkbeck. While studying classical Greek and Latin it was recommended to him to study modern languages at Queen Mary. His PhD thesis was concerned with German language as it developed in the mid-eighteenth century as a vehicle for the description of classical sculpture.

Dr North commented: “The doctorate is a great honour and achievement – I enjoyed the research and the discovery of connections between German pre-classical and classical literary aestheticism. I will not use the title 'Doctor' – at my age it would not be sensible. I have no clearly defined plans but will continue research in the area of my expertise. In what form is unclear at present. I will consult Professor Goerner on the choices open to a post-doctorate research student.”

Stephanie Jade Hartley, 21, has just completed a Foundation Degree in Crime Scene and Forensic Investigation and is graduating with distinction, despite spending much of her first year pregnant, then giving birth during the second year of her course. In September 2010 when her daughter Kaitlyn-Rose was just five-weeks-old, Stephanie returned to classes, waking at 4.30am to reach campus by 9am. She made the 500-mile trip from Blackburn, Lancashire to east London four days a week.

She has been awarded a Discretionary Prize by her School, given to a graduating student for dedication and commitment to their programme. She said: “I am very pleased with my achievement, especially after getting my results. When I first told my family and friends that I would be commuting most people said I would never be able to manage it, but I did. My lecturers understood about delayed and cancelled trains and did all they could to help me manage my workload.”

Queen Mary Disability Support Officer Paul Jarman is graduating with a PhD in English Literature, despite losing his sight as a toddler as a result of the rare eye disease retina blastoma. He had previously achieved a BA in English and Drama from the College. Dr Jarman turned down a place for post graduate study at St. Catherine’s College Oxford for the chance to work under the supervision of Queen Mary’s Dr Andrew Lincoln, with whom he had already had contact in his previous studies.

Dr Jarman found his visual impairment had a far greater impact on his post-graduate studies than during his undergraduate years. The text-intensive nature of the English Literature discipline, the increasing demand for original PhD research and, surprisingly, advances in technology, all presented significant challenges. With historical manuscripts scattered in libraries across the world, the need to organise assistants to read and dictate texts and arrange for hundreds of pages to be microfilmed and sent over from the US took years of work.

His supervisor Dr Lincoln commented: “Paul Jarman was a remarkable research student. He is an accomplished editor, historian, and literary critic who has played a significant role in the current reassessment of the Romantic poet Robert Southey. His thesis not only brings to light a little-known version of a Southey’s epic poem Madoc, but also illuminates Southey’s attitude to history and his political development. Paul generously contributed his editorial expertise to the new multi-volume edition of Southey’s poems. His other publications include an article revising the traditional view of Madoc’s composition and an essay, 'Feasts and Fasts: Robert Southey and the Politics of Calendar'. Paul’s indefatigable determination is truly inspirational!”

Dr Jarman praised his academic department, stating: “Through its blend of past and present research and its never-failing ability to develop and attract so many of the UK’s leading academics, it has consistently remained among the highest ranking English departments in this country.” He credits Dr Lincoln and the sighted readers who have helped him over the years, emphasising that “for all the advances in technology, a good human reader is still to be valued above all else”.