Queen Mary, University of London, is helping to encourage other employers to lift families out of poverty by becoming one of six Principal Partners of the new national Living Wage Foundation. 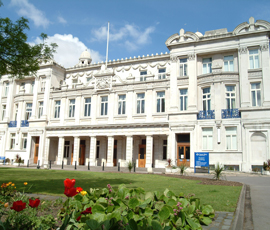 The University has joined the charities Save the Children and Trust for London, the Resolution Foundation think tank, auditing and tax specialists KPMG and global law firm Linklaters to provide strategic advice, financial support and endorsement to the idea of a living wage.

The living wage is considered to be the minimum required for a worker to provide their family with life’s essentials. The current living wage in London is £8.30 per hour, or £7.20 outside the capital.

Leading employers such as PricewaterhouseCoopers, Barclays, the Greater London Authority and recently The Olympic Delivery Authority have all agreed to offer their workers this rate as a minimum. As a result, at least 10,000 London families have risen out of poverty since the campaign began.

Queen Mary agreed to become the first Living Wage campus in the UK in 2006, and has since brought all cleaning services in-house to ensure both social justice and improvements in the service.

The Foundation seeks to build on success in London and move the campaign to the national arena. The call for a living wage has already been picked up by campaigners in Glasgow, Brighton, Oxford and Preston.

Commenting on why Queen Mary fills the criteria for Principal Partner, Rhys Moore, Director of the Living Wage Foundation said: “Queen Mary’s School of Geography has taken a leading role in research into the Living Wage and its effect on low paid workers. This work will provide valuable intelligence to assist in rolling out the Living Wage to the national arena.”

Professor Jane Wills of the School of Geography, is currently conducting a piece of research into the costs and benefits of the London living wage, funded by Trust for London.

The commitment to the living wage reflects Queen Mary’s determination to be a good employer and its long-term commitment to the east end of London. Membership of the Living Wage Foundation will allow Queen Mary to encourage other universities and colleges across the country to do the same.