Business-savvy graduate shares secrets of his success in new book

An entrepreneurial graduate from Queen Mary, University of London has published an inspirational guide for students hoping to replicate his business success. 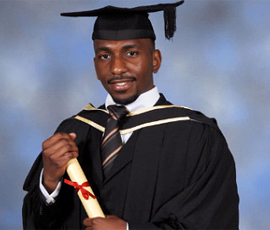 Junior Ogunyemi, 21, started a business whilst studying for a BSc in Economics at Queen Mary. He wrote How to Be a Student Entrepreneur to inspire young people to follow, and achieve, their dreams. Published by Ecademy Press Ltd, it will be in stores from 17 November.

“At university, students would always ask me for business advice, and I would always be more than happy to give out helpful tips,” he says. “Since I couldn’t be everywhere at once, I thought it would make sense to just write a book where entrepreneurs can get the information and knowledge they need.”

Born in Lagos, Nigeria, Junior’s family moved to London when he was two-years-old. The youngest of four children, he grew up in a two-bedroom Islington council flat and has seen the difficulties that can trigger low self-esteem and a lack of ambition in his peers.

At the age of 16, he developed a flair for business and his passion grew stronger as he learned more about the industry. One of his earliest projects was the creation of a yearbook DVD for students at his college. He produced it for just £50, then made over £300 in just two hours selling copies at the college prom.

By the time he graduated from Queen Mary in 2011, Junior owned a football coaching academy operating in schools and communities across London. He is now a full-time social entrepreneur and inspirational speaker, founder and president of self-help website the Bold Achievers Club and director of Show Me Amazing Football, a coaching academy that uses sport as a vehicle to develop leadership and excellence in young children.

Junior sees himself as a role model, and is set on dispelling the stereotype of the underachieving young black male. “This motivation drives me, daily, to become a positive role model to those around me,” he says. “Whether I am giving a talk to a classroom of pupils, coaching a football team or sharing business ideas with aspiring entrepreneurs, I have always enjoyed learning about the causes of problems and playing my part in finding a solution.”

In 2010 Junior was voted in the top 10 most outstanding black students in the UK for 2010 by Rare Rising Stars. In the same year, he received the Black Youth Achievement award for Business and Enterprise, the Unltd Sport Relief Award and the Knowledge East Enterprise Network award, amongst other honours.

For seven years, Junior dedicated his time to studying and shadowing renowned millionaires from around the globe. In How to be a Student Entrepreneur, he shares the lessons he has learned and useful tips to help readers make their fortunes before they graduate.

During his time at Queen Mary, Junior headed the University’s Entrepreneurship Society and recommends that students join similar societies if they want to succeed. “Almost every university has an enterprise society operating on campus because of students’ growing demand to learn this empowering skill,” he says. “I want to be able to open their eyes about the opportunities they can create for themselves and prepare them for how best to become an entrepreneur.”

“Students are beginning to understand that they can take back control of their life through learning how to become more entrepreneurial. Now more than ever, becoming a business owner is the most attractive option to being financially free.”