The 75th anniversary of the Battle of Cable Street, which saw more than 100,000 East Enders stand against the British Union of Fascists (BUF), takes place on Tuesday 4 October 2011. 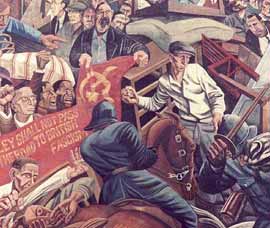 The Battle of Cable Street mural by artist Dave Binnington

To mark the occasion, Dr Nadia Valman, an expert on Jewish history and literature at Queen Mary, University of London, will appear on The One Show on BBC1 (Thursday 6 October) and Making History on BBC Radio 4.

Co-editor of Remembering Cable Street: Fascism and Anti-Fascism in British Society, Dr Valman will comment on the rise of the BUF in the mid-1930s and it’s attempt to stir up racial hatred against the British Jewish population.

“By blaming the Jews for the ills of society and the economic slump the country faced after the Great Depression, the BUF, led by right-wing politician Oswald Mosley, planned to drum up support for their extremist cause,” explains Dr Valman, whose own grandfather was an East End tailor forced out of business after suffering anti-semitic abuse at the hands of the fascist mob.

On 4 October 1936, the BUF had organised a march in the streets of east London, dressed in black shirts to intimidate the large Jewish community that lived there. The march was also a calculated attempt to impress and recruit BUF members from among the unemployed white, working-class residents.

Dr Valman says: “What the ‘Black Shirts’ had not anticipated was the strength of opposition expressed by the people of the East End to their actions.

“Galvanised by anti-fascists, eye witness accounts suggest more than 100,000 people including Jews, Irish dockers, socialists and communists came together on the day to protest at the march.”

Dr Valman, of the School of English and Drama, will describe the flashpoints of violence between the 7,000 police officers - drafted in to protect the fascists and their right to march - and the many thousands of local people who united against them.

“The Battle of Cable Street heralded the introduction of the Public Order Act 1936, which enabled the Home Secretary to ban political marches and forbade the wearing of political uniforms in public. It was also a significant factor in the BUF's political decline prior to World War II.”

Dr Valman will also talk about the huge mural, painted in the 1980s on the side of St. George's Town Hall in Cable Street.  This painting, now restored for the 75th anniversary, was intended to commemorate and depict the Cable Street riots and the modern, multicultural East End.

“It has been defaced many times by neo-fascists since it was commissioned, demonstrating that the fight against prejudice that took place on Cable Street 75 years beforehand cannot be forgotten,” notes Dr Valman.