The sister of a Gunpowder plotter and a royal heir were among 4,000 women who risked life and liberty to join English Catholic convents exiled in Europe between 1600 and 1800, new research has revealed. 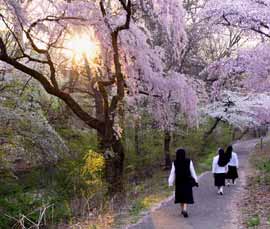 The findings were made by a team of academics working on the ‘Who Were the Nuns?’ project, based in the School of History, Queen Mary, University of London.

The researchers received almost £600,000 from the Arts and Humanities Research Council three years ago - an unprecedented level of funding for a study focused on Catholic history.

The project’s aim is not only to profile individual nuns, but also to understand how the convents managed to recruit and survive against a backdrop of war, plague, and political unrest in mainland Europe and England.

“We have undertaken a comprehensive study of the thousands of Catholic women who broke the laws of the land to continue practising their faith in English-led convents overseas," explains Dr Caroline Bowden, project manager and research fellow at Queen Mary.

"They would have been very brave and committed to make the treacherous journey overseas; it was extremely rare for women to travel in those days, and a criminal offence for English women to become nuns after the dissolution of the monasteries in the 1530s.”

Researchers gained unprecedented access to thousands of rare manuscripts, revealing testimonies and other written records in England, Belgium and France that had remained largely hidden in archives and convents over the centuries.

These sources were originally produced by the nuns to record details of their members, daily devotional and domestic pursuits, and offer uniquely female perspectives on wider issues of the day such as literature, finance, national identity and the nature of exile.

The painstaking efforts of the research team have resulted in an extensive survey of all 22 English convents abroad together with their surviving sources. The project has since identified and profiled a wealth of fascinating women from disparate backgrounds, who joined the English convents in exile.

Born into a landed family in Leicestershire, Elizabeth Digby crossed the English Channel to become a Benedictine nun in Brussels in 1611. She was the sister of Gunpowder plotter, Sir Everard Digby, who was embroiled, along with Guy Fawkes, in the 1605 failed attempt to blow up the House of Lords. She was also the aunt of Sir Kenelm Digby, a controversial English Catholic courtier and diplomat.

Barbara Fitzroy, another Benedictine nun, along with her sister, was described in convent records as the illegitimate daughter of King Charles II, although recent research challenges the these claims of the king’s paternity.

“One of the most noteworthy cases involves Richard Weston, the Lord Treasurer of England under Charles I,” says Dr James Kelly, post-doctoral research assistant on the project.

“Despite working at the heart of a regime that forbade the practice of Catholicism, Weston’s family had deep connections with the convents abroad: four of his granddaughters even became nuns.

“Nevertheless, it should not be assumed that the convents were just the preserves of the elite.  Recruits came from all backgrounds, from the daughters of tenant farmers to those of aristocracy,” adds Dr Kelly.

Americans were also among the recruits. The first, from Maryland, joined a convent in Liège, Belgium, in 1721 and was followed by more than 60 others. Most were the offspring of tobacco planters who wanted a Catholic education for their daughters; unavailable at the time in America. Four of the nuns returned to Maryland and opened the first English-speaking convent in the New World.

“Another interesting case was that of Francis Bedingfield Esq of Redlingfield, Suffolk who had 11 daughters in convents in Europe," says Dr Bowden. "While 10 of the Bedingfield sisters became nuns early on in their lives, one broke the mould by marrying. She only joined a convent after becoming a widow in later life.”

Far from being shut off from the world in their cloisters, convent inhabitants were politically active, particularly with the Jacobite cause after James II was driven from England in 1688. In addition, they had connections with some of Europe’s major figures, from royal families to artists.

Dr Bowden says: “The project even unearthed clear evidence that three granddaughters of the famous court painter Van Dyck became nuns in English convents in Belgium, as did close relatives of several of his most prominent sitters.”

“Convents were definitely hubs for English Catholic culture and learning, commissioning splendid buildings and patronising the arts. Surprisingly, Protestants would flock to visit the convents on the Grand Tour, and although they were not allowed to see the nuns, they could hear them singing.”

To survive, the convents had to be self-sufficient financially, generating income by offering prayers and masses in return for donations, but their main sources of income were the mandatory dowry each nun paid on entry, and benefactors  who supported the Catholic cause.

English convents overseas were also places where young girls went to be educated, as the nuns ran schools. Widows, women separated from their husbands, and even gentlemen could also pay to lodge in the convents as ‘pensioners’.

“Although one convent was closed because of financial problems, all 21 others survived until the French Revolution, when English society became more tolerant and many of the nuns returned home. The key documents they have preserved for hundreds of years have proved massively beneficial to our research,” Dr Bowden adds.

Where possible these sources have been edited and made accessible on the project website, and linked to their author’s profiles on a new online register of convent members. Manuscripts are being transcribed for a six-volume collection to be published by Pickering and Chatto in 2012-2013.

“Our database provides a detailed picture of a nun’s life and work and is an invaluable tool for religious and social historians or those studying women’s intellectual history of this period,” Dr Bowden says.

Biographical information on each nun, including their immediate family, their admission dates, size and currency of their dowry, promotions, and obituaries are stored on the database.

Records of why a trainee nun succeeded or failed to pass probation and why nuns left the convent are also logged wherever possible. If some candidates were rejected, there was a selection process at work: these were not women who were being pushed out of their families into the enclosed life even if they had no religious vocation.

Social network analysis undertaken for the project has also revealed much about the web of supporters, agents and families that kept the convents alive for 200 years.

Dr Katharine Keats-Rohan, a history researcher from the University of Oxford, who is on the project team, has constructed a collection of family trees of the most prominent families involved. These are being made accessible online.

“As the religious life is not attracting many entrants these days, the project is doing an important job in locating and recording archives as convent communities find survival an increasing challenge,” Dr Bowden explains. “Since we began our research several convents have closed or downsized: we are able to help preserve their history for the future as well as record their past.”