Queen Mary, University of London has successfully secured two funding awards to enhance and celebrate east London life in the run up to the 2012 Olympic and Paralympic Games. 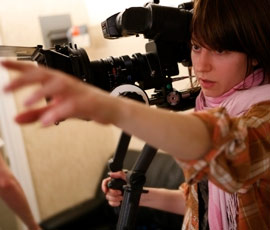 Ali Campbell will use the funding to map and celebrate community identity across the ages, using performance arts. Called LIVING MAP, the technique has previously had great success in settings as diverse as Rio de Janeiro, Lewes and Beckton.

“The results will be part-performed, part-displayed as mini installations suitable for bus shelters, shop fronts and other window-sized spaces the length of Mile End Road to be admired, wondered at or simply happened upon.

Established in September 2009 by Assistant Technical Director for Film Studies at the College, Athena Mandis, Mile End Films is a cutting-edge production unit based within the College, run by its film graduates.

For the High Street 2012 grant, MEF has established the project ‘Walk with Me’, researching how communities living and working along Whitechapel High Street and Mile End Road use local cinema spaces and their cultural significance in east London.

The project will be recorded using film and displayed online as well as public spaces within Tower Hamlets in 2012 to coincide with the celebrations in the run up to the Olympics.

High Street 2012 is an ambitious scheme to regenerate the East End high street route prior to the Games, offering better walking and cycling opportunities and increasing green spaces, improved traffic routes, facilitating cultural celebrations and the restoration of historic buildings and spaces.

The project is being co-ordinated by The London Boroughs of Tower Hamlets and Newham, the London Development Agency and its Design for London team, Transport for London, the London Thames Gateway Development Corporation and English Heritage among others.