A champion of the East End and a great reformer for social justice, former Prime Minister Clement Attlee, was honoured with a statue unveiling at Queen Mary, University of London on April 4, 2011. 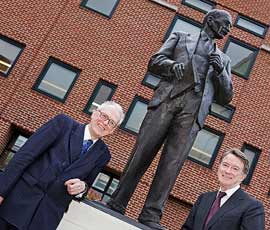 A lecture to celebrate Attlee’s achievements was delivered by Lord Hennessy, Attlee Professor of Contemporary History at Queen Mary.

Lord Hennessy said: “During Attlee’s time at the helm, between 1945 and 1951, the British government took major steps to nationalise major industries and public utilities as well as create the National Health Service. He set the gold standard for the conduct of the Premiership and for standards of duty and decency at the top for all subsequent Prime Ministers. How honoured we are to have our gold standard Prime Minister in bronze on our Queen Mary campus in his beloved East End."

Lord Mandelson was invited to reveal the statue, and its commemorative plaque, as his grandfather Herbert Morrison was Deputy Prime Minister and Leader of the House of Commons in Attlee’s Cabinet.

Lord Mandelson said: “It is such a delicious irony that I of all people, Herbert Morrison’s grandson, should unveil a statue of Clem who of course did so much for and struggled for so long and overcame so much to deny my grandfather ever becoming leader of the Labour Party. And how well he did it.

“It is true, of course, that my grandfather and Clem were not soul mates. But it just went to show that in a partnership you don’t have to love each other in order to make a really good and effective team as they were.

“Attlee took great pride in his work in the East End and his achievements for social justice were incomparable. He managed these extraordinary achievements in one term of Government. The scale and speed of economic change is unlikely to be unsurpassed.”

As a 12-year-old boy, in 1966, Lord Mandelson even met Lord Attlee at Downing Street and recalled a frosty grunt being the extent of their introduction. “Never was so much said in one grunt,” he joked.

The statue, owned by Tower Hamlets Council, was originally sited in Limehouse in 1988 and unveiled by former Labour Prime Minister Harold Wilson, but over the years fell into disrepair and was vandalised.

The Council and Queen Mary have worked together to restore the statue back to its former glory. The College funded the restoration and the statue is now on long term loan from the Council and located on the college’s Mile End campus.

Mayor of Tower Hamlets, Lutfur Rahman added: “Recognising important historical figures that our area has produced always makes me proud of this borough.  And in this current climate, we should be particularly proud of Attlee’s achievements.

“First as Mayor of Stepney, he defended the poor of this area against slum landlords. And later as MP for Limehouse and as Prime Minister, he oversaw the creation of the welfare state. Attlee was a truly courageous and inspired politician.”

Before the lecture, Lord Mandelson also awarded the Attlee Prize for Academic Attainment to 10 history students who achieved firsts on the Cabinet and Premiership course run by the School of History.

The course is taught by Professor Hennessy and Dr Jon Davis, who both head up the Mile End Group, which brings in past political heavyweights, including Lord Mandelson, to enliven its teaching of British contemporary political history.