An expert on nineteenth-century literature at Queen Mary, University of London has been made a Visiting Scholar by the American Academy of Arts and Sciences. 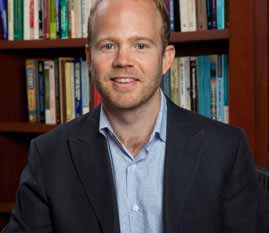 During his year-long residency at the Academy in Cambridge, Massachusetts, Dr Matthew Rubery will work on the project, The Untold Story of the Talking Book, researching the story of recorded literature since Edison invented the phonograph in 1877.

Dr Rubery, from the QM School of English and Drama, was one of seven academics awarded a fellowship under the Academy’s Visiting Scholars Programme, which supports potential leaders in the humanities, policy studies, or social sciences.

Rubery says he plans to use his time at the Academy “listening to early recordings of literature made for Victorian audiences and for blinded veterans returning from the First World War”.

“Boston is a great place to do research on talking books,” he adds. “Harvard’s Woodberry Poetry Room made a recording of TS Eliot reading his poetry in 1933, and nearby is the Perkins School for the Blind, which Charles Dickens visited in 1842 during a lecture tour of America.”

In addition to nineteenth-century literature, Dr Rubery works on print culture, and reading practices. He is the author of The Novelty of Newspapers: Victorian Fiction after the Invention of the News (Oxford 2009), which won the European Society for the Study of English (ESSE) First Book Award 2010.

Since the AAAS fellowship programme’s launch in 2002, 67 scholars have gone on to secure teaching and research positions at Columbia, Harvard, Yale, among others. They have used their residency at the Academy to complete more than 60 books and numerous articles.

Founded in 1780, the American Academy of Arts and Sciences is an independent policy research centre that conducts multidisciplinary studies of complex and emerging problems.

Earlier this year, in response to a request from members of Congress, the Academy established the national Commission on the Humanities and Social Sciences to explore ways to bolster teaching, research, and scholarship in the fields. Current Academy research also focuses on science and technology policy; global security; energy; social policy; and education.

Guidelines and application forms for the Visiting Scholars Program are available on the Academy’s website: www.amacad.org.