History of man jewellery revealed in gem of an exhibition

A student at Queen Mary, University of London, has curated a British Museum exhibit of contemporary jewellery inspired by men’s fashions from both the Renaissance era and today. 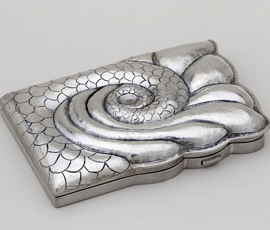 A sterling silver business-card holder from the collection, by silversmith Aoife White

Natasha Awais-Dean is in the third-year of her PhD research into the significance of jewellery owned and worn by men in the Tudor and Jacobean periods (1509-1625).

For the exhibition, Natasha asked postgraduate craftsmen and women at Bishopsland Educational Trust, Oxfordshire, to design and make pieces inspired by the British Museum's Renaissance jewels, whilst also considering the tastes of modern man.

“During the Renaissance period, men wore as much jewellery as women,” Natasha reveals. “Far from just adorning the body, their accessories could reflect their wealth, social status, job, morals and lineage.  My research project aims to provide a strong social and historical context for jewellery worn by 16th and early-17th century men and so for this display, I wanted similar ideas to be conveyed in the modern pieces that have been created.”

The silversmiths’ works include a business-card holder engraved with the design of a Celtic dragon’s tail, chains inspired by Renaissance chains of office, belt buckles and a brooch in the form of a Tudor chimney. Each item incorporates modern trends but features 400-year-old symbolism and design references.

The final collection, Inspired: Contemporary Views of Renaissance Jewellery, is now on display at the British Museum's Gallery 46 alongside original pieces from early-modern European history. The exhibit will run from 11 November 2011 - 30 January 2012 and admission is free.