Professor Elizabeth Davenport from the Institute of Dentistry was “overwhelmed” to be honoured for outstanding achievement in dentistry at the Dental Awards 2010 recently. 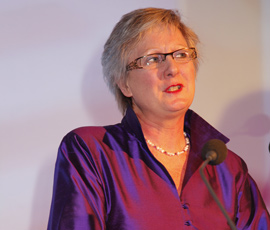 The awards, which acknowledge contributions from professionals in the dental industry, were held at the Lancaster London hotel on 23 April 2010.

Davenport, a Professor of Dental Education at Queen Mary, University of London said she had “no idea” she was in line for the acknowledgement.

“I’m overwhelmed to be recognised for what I do in dentistry both here and in the external arena. I’m extremely pleased to receive this award,” Professor Davenport said.

Elizabeth Davenport’s career has been devoted to paediatric dentistry, as both an educator and a clinical specialist. She qualified in dentistry from the Royal Dental Hospital School of Dental Surgery, University of London in 1974.

Professor Davenport’s research interests are focused on oral epidemiology, culminating in her PhD on Caries Risk in Children in 1993 and attending the London School of Hygiene and Tropical Medicine to complete an MSc in Medical Epidemiology, one of the few dentists worldwide to have done so, and on dental education.

Professor Davenport was awarded a personal chair in Dental Education in 2003, the first in the United Kingdom, in recognition of her contribution to dental education at the local, national and international level and as part of Queen Mary, University of London’s recognition of excellence in teaching.

She is chair of the International Association for Dental Research Ethics Committee and revised the Association’s Code of Ethics. Her most recent achievements include being appointed as a registrant member to the reconstituted General Dental Council and receiving a National Teaching Fellowship in 2006.

The Dental Awards 2010 are organised by Purple Media Solutions Ltd (publishers of The Probe, Smile and BDNJ) and sponsored by the British Dental Health Foundation, TheDentalWeb, Dentsply, Practiceworks and The Wrigley Company.

News story: A change of scenery for a Dentistry student
22 May 2020