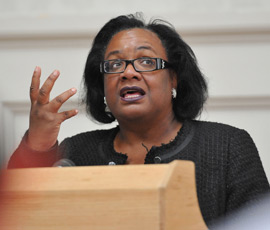 Elected as Britain's first black female member of parliament in 1987, Abbott gave an uplifting address to over 150 aspiring university attendees at a schools' open-day, entitled Why we are scientists, organised by Queen Mary's School of Biological and Chemical Sciences.

Abbott's message to the students aged 16-18 from around London and the home counties was that "there is no substitute for a top class university… such as Queen Mary", and she spoke in no uncertain terms about the opportunities that education had offered her in life.

As the "quite stroppy" daughter of immigrants from Jamaica who both left school aged 14, Abbott largely attributes her success to her education. She described how the whole university experience - not just the books - had shaped her life, making her who she is today and showing her how to rise up and reach the goals in her life.

"There is no substitute for doing the subject that really challenges you", Abbott stressed, "rather than something a little less interesting and harder to get into. Something that can really shape your mind and your view of the world". She went on to praise the emerging economies of China and South Asia for their commitment to subjects like science, maths and computing, subjects which she claims guarantee those countries' future success.

During the morning, Abbott and the young attendees heard presentations and joined debate about the inspirational work taking place in the School of Biological and Chemical Sciences, including the latest developments in generating energy from sunshine, understanding addiction and drug dependence and controlling the risk of bacterial infection in schools, hospitals and petting zoos.

Diane Abbott has been a Member of Parliament for 23 years and is currently MP for Queen Mary's neighbouring constituency of Hackney North and Stoke Newington. She is a history graduate from the University of Cambridge, she has worked for the Home Office and for the lobby group National Council for Civil Liberties before becoming a journalist. She has presented a programme about the Treasury for BBC Radio 4 and has made regular appearances on the BBC One late night political discussion show with Andrew Neil and Michael Portillo MP.