The discovery of a rare bat species in a tiny fragment of rainforest surrounded by an oil palm plantation has demonstrated that even small areas of forest are worth saving. 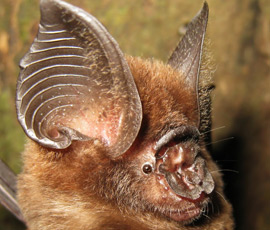 This first record of the Ridley's leaf-nosed bat in Sumatra follows the publication of a paper in the journal Conservation Letters that suggests retaining forest fragments within oil palm plantations is not an effective strategy for protecting wildlife.

Conservationists from Queen Mary, University of London, the Zoological Society of London (ZSL) and the Durrell Institute of Conservation and Ecology (DICE) discovered the Ridley's leaf-nosed bat in a 300ha fragment of forest during a biodiversity survey in West Sumatra, Indonesia.

"The finding of this survey suggests that a network of forest fragments may be appropriate for some species of high conservation concern. The scientific community needs to continue to support the business community to find ways in which our threatened wildlife can persist in these managed areas over the long-term," said survey leader, Dr Matthew Struebig, who holds a joint post in Queen Mary's School of Biological and Chemical Sciences and DICE at the University of Kent.

The area surveyed in Sumatra is currently managed as a conservation area by the palm oil company, limiting the impact of logging and encroachment on the forest fragment. Amongst many other species found by the biodiversity survey were sunbear, tapir, agile gibbon and banded langur, all of which are also of conservation concern.

The progress and future of the Roundtable on Sustainable Palm Oil certification scheme is being discussed this week at the upcoming 8th Annual Roundtable Conference in Jakarta, Indonesia. Currently, the Roundtable requires member palm oil producers to identify High Conservation Values within their concession, or that could be affected by their operations, and then implement measures to maintain and enhance these values.