Recent years have seen an unusual rise in the number of bees about in the cold winter months, and scientists are now beginning to find out why. 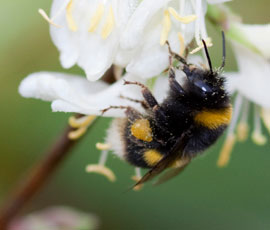 While most bees are hibernating, the buff-tailed bumblebee, Bombus terrestris, is out taking advantage of exotic winter-flowering plants in our gardens and parks, according to scientists from Queen Mary, University of London.

The study, published in the journal PLoS ONE, suggests this unique species raises an extra generation of workers to collect nectar from such plants as strawberry trees and holly-like Mahonia, which flower during the colder months.

"All of the UK's bumblebee species normally die out in the autumn leaving only their new queens to survive the cold in hibernation," explains Dr Thomas Ings from Queen Mary's School of Biological and Chemical Sciences. "However, this research points to a major new change in the behaviour of the British buff-tailed bumblebee."

"It is tempting to link the increase in winter bee activity to climate change, especially with the warmer winters we've experienced over the last two decades, but the fact that we only find winter bees foraging on exotic flowering plants in parks and gardens suggests that Britain's love of winter flowering plants plays a crucial role."

According to colleague Ralph Stelzer, these winter bees might even be able to collect nectar faster than those foraging in the summer. He monitored the bees' activity by tagging them with tiny state-of-the-art Radio Frequency Identification (RFID) chips - similar to the technology used in the Transport for London's Oyster cards system - and measuring the amount of nectar they collected.

Dr Ings has recently been awarded a three year Early Career Fellowship from the Leverhulme Trust to carry out further research into the reasons behind the bees' changing behaviour. He also hopes to investigate the effect the coldest winter for almost 30 years has had on bee activity.