Dr Paul Curzon, from the School of Electronic Engineering and Computer Science at Queen Mary, University of London, has been appointed as a National Teaching Fellow by the Higher Education Academy. 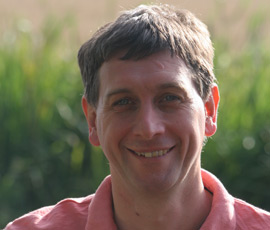 Chosen from nearly 200 nominations across England and Northern Ireland, up to 50 Fellows per year are awarded £10,000 in recognition of their individual excellence and professional development in teaching and learning.

Queen Mary has been very successful in the competition for National Teaching Fellowships in recent years, with at least one Fellow appointed every year since 2006.

A major part of Dr Curzon's teaching is helping students to learn how to program a computer. He believes it should most of all be enjoyable, and gives lectures that inspire and enthuse his students; using metaphors wildly as well as theatrical activities to explain concepts in a fun way. In one class he creates 'computer programs' made with rope, tubes and students to help visualise the invisible computation that takes place when a program is executed.

As one of his students noted; "he makes very difficult concepts very easy, by using simple verbal and physical examples. He makes learning programming fun, not something I had thought possible."

Dr Curzon aims to infect his students with his passion for the subject. As a fellow lecturer commented after observing one of his classes; "Paul clearly enjoys his lecturing and brings great energy and enthusiasm. The class engaged in interactive exercises with enthusiasm."

While many universities suffered dramatic drops in computer science applications, Dr Curzon has taken this teaching approach out into schools with 'cs4fn: computer science for fun', an international campaign to get people excited about computer science. By taking the same off-beat approach that he uses in his lectures to teaching research topics to kids, it has led to a dramatic turn-around of interest in the subject.

Funded by the Engineering and Physical Sciences Research Council with support from Google, ARM and Microsoft, cs4fn consists of a magazine given free to schools, an interactive website receiving 15 million worldwide hits last year, and popular shows at schools. His current project focuses on inspiring girls to take up computer science, including a special issue magazine, entitled The women are here.