According to the 2010 National Student Survey, the overall satisfaction rate among students at Queen Mary, University of London rose from 85 per cent to 86 per cent, four per cent higher than the national average. 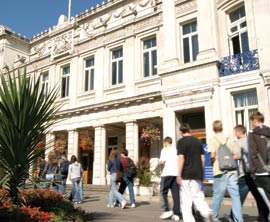 “The College pays very close attention to its National Student Survey results and works consistently to ensure that all students have the best possible learning experience at Queen Mary,” says Professor Morag Shiach, Vice-Principal for Teaching and Learning,

“We were particularly pleased to see significant improvements in students’ levels of satisfaction with assessment and feedback and with academic support, as these are areas on which we have focussed over the past couple of years.”

Over 252,000 final-year students took part in this year’s National Student Survey (NSS), which is published annually by the Higher Education Funding Council for England (Hefce).