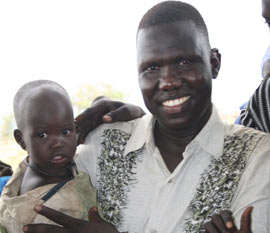 The film, directed by Jen Marlowe, follows Garang Mayuol, Koor Garang, and Gabriel Bol Deng, three boys who fled their Sudanese villages due to civil war in the late 1990s.

Now in their twenties, and living in the US, these young men embark on a journey back their African homeland to discover whether their families have survived, and how they can help to transform their devastated communities.

Rebuilding Hope also sheds light on what the future holds for Sudan in its precarious struggle for peace and stability. All proceeds from the film will go towards health care and educational projects in Sudan; all these humanitarian efforts are spearheaded by Garang, Gabriel and Koor.

The film has already won one award and has been selected for numerous international events including the Fargo Film Festival 2010 in North Dakota, USA and the Paris International Human Rights Film Festival.

Organised by the Centre for the Study of Migration at Queen Mary, the screening was followed by a question and answer session with the film’s production team: director Jen Marlowe, co-producer Lehni Lamide Davies and music director Dave Randall.