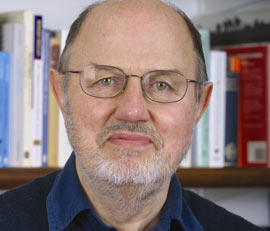 Each of the four hour-long shows focuses on an exhumed corpse from a different era of British history and uses modern forensic science techniques to shed light on what they would have looked like and the sort of life they led.

Professor Bolton was interviewed for episode one, which revolves around the rare discovery of an 800-year-old skeleton of an African man in a Franciscan burial ground in Ipswich.

The programme reveals the man was born as a Muslim in 13th-century Tunisia; and taken back to England during the ninth Crusade, converting to Christianity before living in the UK for over 10 years. He died, possibly as a result of a painful spinal abscess, and was buried in the friary graveyard.

Professor Bolton, an expert on migration in the late middle ages, said it was “very unusual indeed” to find non-European people living on English soil at that time.

“There is some written evidence of Africans in medieval England but to find skeletons; I have never come across it before.

"Between the fall of Roman Empire and the fifteenth and sixteenth centuries, it is very rare to find Africans – very rare."

Tune in to see Ipswich Man, the opening episode of History Cold Case on BBC 2 at 8.55pm on Thursday 6 May.