How women first stirred the British love of tea

Women led the tea-drinking boom when it first took hold in eighteenth-century Britain, reveals new research by a cultural historian at Queen Mary, University of London. 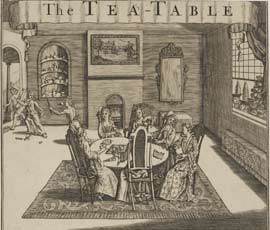 The British story of tea and its widespread popularity among women of all classes during the eighteenth century will be explored by Professor Markman Ellis during his inaugural lecture on Tuesday 12 January 2010.

Using literary evidence in poetry, letters and satires and caricatures of the day, he will outline the cultural association between tea and female polite society and domestic life.

“When tea first arrived in the UK, its luxury status, and exotic, delicate flavour made it an instant hit with women at Court,” explains Professor Ellis, a professor of eighteenth-century studies in the Department of English.

“By the 1750s, when tea becomes an everyday commodity, women up and down the social order were emulating aristocratic women in their habits of tea-drinking and porcelain collecting, and their genteel manners.”

Professor Ellis, author of The Coffee House: a Cultural History, will also discuss the place in society that tea gained compared to the nation’s other favourite hot beverage, coffee.

“While men met in raucous coffee houses to drink, read and debate public affairs, society dictated that women socialised in private, at home. Their social world was domestic, discreet and centred on polite, tea-table conversation.

“Tea-table culture, and its association with female manners, civility and refinement, was held up as a model of good behaviour and social reform. Many contemporary commentators argued that society as a whole would benefit if men abandoned the coffee house and joined women at the tea-table,” adds Professor Ellis.

Lecture: The Philosopher at the tea-table