Director of Liberty to discuss faith and rights in the workplace

The director of human rights group Liberty is to deliver the annual LexisNexis Butterworth Lecture on Law and Society at Queen Mary, University of London on Tuesday 23 March 2010. 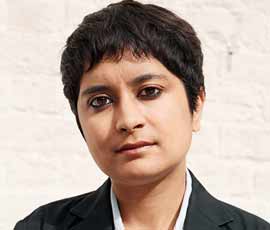 Shami Chakrabarti, a leading civil liberties campaigner and lawyer, will speak on faith in the workplace - an issue that Liberty frequently campaigns on.

“If we really believe in freedom of thought, conscience and religion,” argues Shami, “this must include the right to the faith or belief of your choice, the right to no faith and crucially to be a heretic to any religion.

“As with other forms of individual expression and autonomy, we should be slow to interfere with the expression or manifestation of religious or other belief, doing so only when such intervention is necessary and proportionate to protecting the rights and freedoms of others,” she adds.

Most recently, the pressure group represented airport check-in clerk, Nadia Eweida - a devout Christian, who challenged a British Airways’ dress policy that stopped her wearing a crucifix at work.

BA eventually relented, changing its policy to allow Eweida to return to work, but she is now taking the airline to the High Court in a bid to force them to admit it was wrong in demanding she stop wearing a religious symbol.

A Barrister by background, Shami was called to the Bar in 1994, before spending six years working at the Home Office as a legal adviser to ministers and senior policy makers.

She joined Liberty, as In-House Counsel, on 10 September 2001 and spent the following two years campaigning against post-9/11 anti-terrorist measures and counter-terrorism legislation. Since becoming Liberty’s Director in 2003, Shami has written, spoken and broadcast widely on the importance of human rights and civil liberties.

She is Chancellor of Oxford Brookes University; a Governor of the London School of Economics and the British Film Institute; a Visiting Fellow of Nuffield College, Oxford and a Master of the Bench of Middle Temple. Shami was appointed a Commander of the Order of the British Empire (CBE) in the 2007 Queen's Birthday Honours.