Fresh research revealing the critical role Britain played in the American Civil War has spawned a series of walking tours, taking in historic sites around the UK capital connected to the famous nineteenth-century conflict. 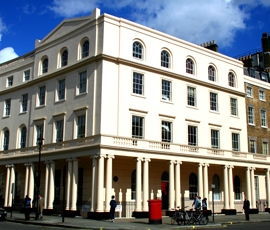 Second US Embassy in London, just of Regents Park

The tours, which start on Friday 8 October 2010, are based on the PhD findings of Tom Sebrell, a teaching associate at Queen Mary, University of London.

He spent four years researching American Civil War propaganda movements that thrived in Britain while the conflict raged between Southern slave states (the Confederacy) fighting for independence from the United States (Unionists) on the other side of the Atlantic between 1861 and 1865.

During his studies Tom discovered numerous buildings and locations around London, 50 in total, that look "pretty much as they did in the 1860s", which he describes as crucial to this previously untold side of the Civil War story, and the future of the United States.

A native of Virginia, Tom knows the tours will prove a massive draw for American tourists and Civil War enthusiasts, of which there are millions.

"The Civil War is like a second religion in the US; even President Obama is a huge buff. And great crowds of Civil War re-enactors make the pilgrimage to Gettysburg in Virginia and other major battlefields, but as so many downtown locations in the US have been destroyed by urban renewal, they are always looking for new ground, and Britain has that in spades," says Tom.

Starting this Friday, a trained team of Queen Mary history undergraduates will join Tom as tour guides around two central London locations: Piccadilly and Mayfair and Marylebone, with a third taking in the City (Ludgate Hill and Fleet Street) from 26 October.

The tours will take in buildings used by both Union and Confederate diplomats, propagandists, and spies, and several headquarters of British societies with political affiliations to both sides of the conflict. "This was after all a very British affair," notes Tom.

"Very rarely are the ambassadors, merchants, or naval shipbuilders sent by Lincoln or the Confederacy highlighted in the war's history in spite of the fact that their roles and actions were of far greater significance than events on the battlefields."

"Abraham Lincoln chose Charles Francis Adams to serve as his ambassador to London. Adams, son of the sixth President of the United States and grandson of the second, lived at Mansfield Street off Portland Place in the city and played a vital role in winning the war and saving the Union."

Tom is the first person to ever study which people subscribed to propagandist literature, in the process flagging surprising key players in the war effort. His research has exposed the extent to which The Index, the Confederate propaganda newspaper, published in London, influenced Members of Parliament, the Cabinet, the Church of England, and the British aristocracy.

Even delivered to 10 Downing Street, The Index was edited by Henry Hotze, who lived at 17 Saville Row, and regularly attempted to infiltrate the British press, writing pro-Southern articles for The Times, The Morning Post, The Evening Standard and The Morning Herald.

Meanwhile The London American, the pro-Northern counterpart of The Indexcounted Abraham Lincoln among its subscribers. Both were written and printed two doors apart from buildings still standing on Fleet Street.

Southern states used The Index to try to change hearts and minds in Europe to support their quest for independence. Tom explains: "With only cotton and tobacco in plentiful supply, the Confederacy relied on Britain for mediation and vital military supplies."

The Confederacy had its own postal service, and all its stamps and stationery were made in London, as were naval uniforms, rifles, Confederate flags, and printing plates for Confederate money.

"What my PhD has shown is that this is not just an American topic. The reason the American Civil War ended as it did, and the South failed to win, is because the British did not intervene on their behalf; had they done so this would have undoubtedly been World War I," says Tom.

"These three separate walking tours bring back to life the long forgotten stories not only of the Union and Confederate agents and diplomats stationed in London throughout the war, but the British response to the American Civil War arriving at their doorstep."

Go to www.acwlondon.org for more information on the American Civil War in London tours.