Amanda Vickery goes behind closed doors with the Georgians 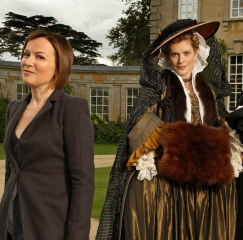 Starting on 2 December 2010, At Home with the Georgians, which Amanda also wrote, combines the pleasures of costume drama, ‘homes and gardens’ features and social history. Or ‘sex, scandal and soft furnishings’ as the trailer promises.

She brings to life the golden age of home-making, when the British became a nation of shop-keepers and ordinary middling families became keen on keeping up appearances.

She will also reveal that this great obsession to create the perfect home, which is still with us today, was not driven by women, but, surprisingly, by men.

Based on Amanda’s highly acclaimed book Behind Closed Doors, the series uses letters, criminal trial records, diaries and artefacts, previously lost to history, to expose the secret lives of real eighteenth-century men and women, and their dwellings.

Exploring palaces and town houses, grotty garrets to the workhouse, she becomes the ultimate house detective unlocking the doors to a lost world.

“As we wander through the Palladian splendour of National Trust Georgian properties," says Amanda, "admiring refined interiors and pared-back taste, we should remember that what we are seeing is actually a skeleton - it is the messy lives of the people who really lived there that provide the flesh and blood.”

She will introduce us to the full spectrum of Georgian society: gentlewomen in their stately mansions; bachelor clerks in their dreary lodgings; genteel spinsters keeping up with the Joneses in two rooms; and, servants with only a locking box to call their own.

“Historians are all natural voyeurs itching to know what really went on behind closed doors," explains Amanda. "I have spent the last six years toiling in deeply unglamorous local record offices - 64 of them at my last count - reading manuscripts. I use them to peel back the façade of Georgian elegance and to tell the stories of past lives.”

Amanda Vickery is joining Queen Mary from a professorship at Royal Holloway, University of London. A historian, writer and broadcaster, she lectures on British social, political and cultural history from the seventeenth century to the present.

The series has already received rave reviews in the national media, from the Observer to the Daily Mail. The Guardian praised Professor Vickery’s "erudition and relish for domestic minutiae", while The Sunday Telegraph described her as “a naughty, clever, humorous eavesdropper on the past”.

A sentiment echoed by The Sunday Times which declared that "Simon Schama possibly excepted, television has never before seen so exuberant a history presenter: Vickery enthuses about her Georgians like soap-opera characters and treats the viewer as a confidante; and when she says her Essex chatelaine combined Margaret Thatcher's bossiness and Nigella Lawson's flirtatiousness, there's a hint of self-description".