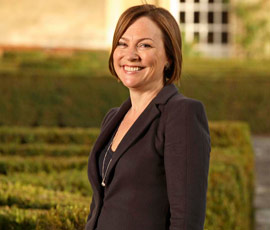 An authority on British social history, particularly our home life from the seventeenth century to the present, Professor Vickery will oversee two brand new courses for spring 2011.

For undergraduate history students, Professor Vickery is running ‘Behind Closed Doors: House, Home and Private Life in England, c.1660-c1850’, and for postgraduates the MA: ‘Women and Gender in Georgian England’.

She is also an experienced supervisor of MPhil and PhD dissertations, and would especially welcome those students interested in the history of consumerism and dress, homes and space, women and gender since the late Middle Ages, and those fascinated by archival research on unusual sources.

Speaking of her forthcoming move, Professor Vickery described Queen Mary as a “go-getting, buccaneering institution”, full of “great scholars and public intellectuals”. “I can’t wait to become an East Ender myself,” she adds.

The prize-winning author of The Gentleman's Daughter: Women’s Lives in Georgian England (Yale, 1998), Professor Vickery joins the College from Royal Holloway, where she held a post in modern British history.

Her latest book, the critically-acclaimed Behind Closed Doors (Yale University Press, 2009), has just been adapted for a major new BBC 2 series, At Home with the Georgians.

The three-part programme, which Amanda presents, starts on 2 December 2010, at 9pm, and explores the unique relationship Britons had with their homes in the Georgian era – the golden age of home-making.

Professor Vickery is no stranger to Queen Mary, having delivered its 2008 HarperCollins lecture ‘Out of the Closet:  Love, Power and Houses in 18th-Century England’.

And, as a serving member on the advisory board of ‘Fashioning the Early Modern’, a new cultural history project at the College, run in collaboration with the Victoria and Albert Museum.

On arrival at Queen Mary, Professor Vickery “warmly anticipates” joining its Centre for Eighteenth-Century Studies, collaborating with the School of Geography on the history of homes, and sharing her research interests with colleagues working across the Faculty of Humanities and Social Sciences.

She is also keen to build direct links with local cultural institutions, including the Museum of London, the National Maritime Museum, and the Bethnal Green Museum of Childhood, as another way to enrich her teaching.

“My new students should get their walking shoes on,” she says, “as we will be off on tour this spring!”