Asier and Belinda at the British Combinatorial Conference

Several member of the Combinatorics Group participated in the British Combinatorial Conference at Lancaster University in July 2022. After the conference we got the thoughts of two PhD students in the group Asier Calbet and Belinda Wickes who were attending their first major conference. 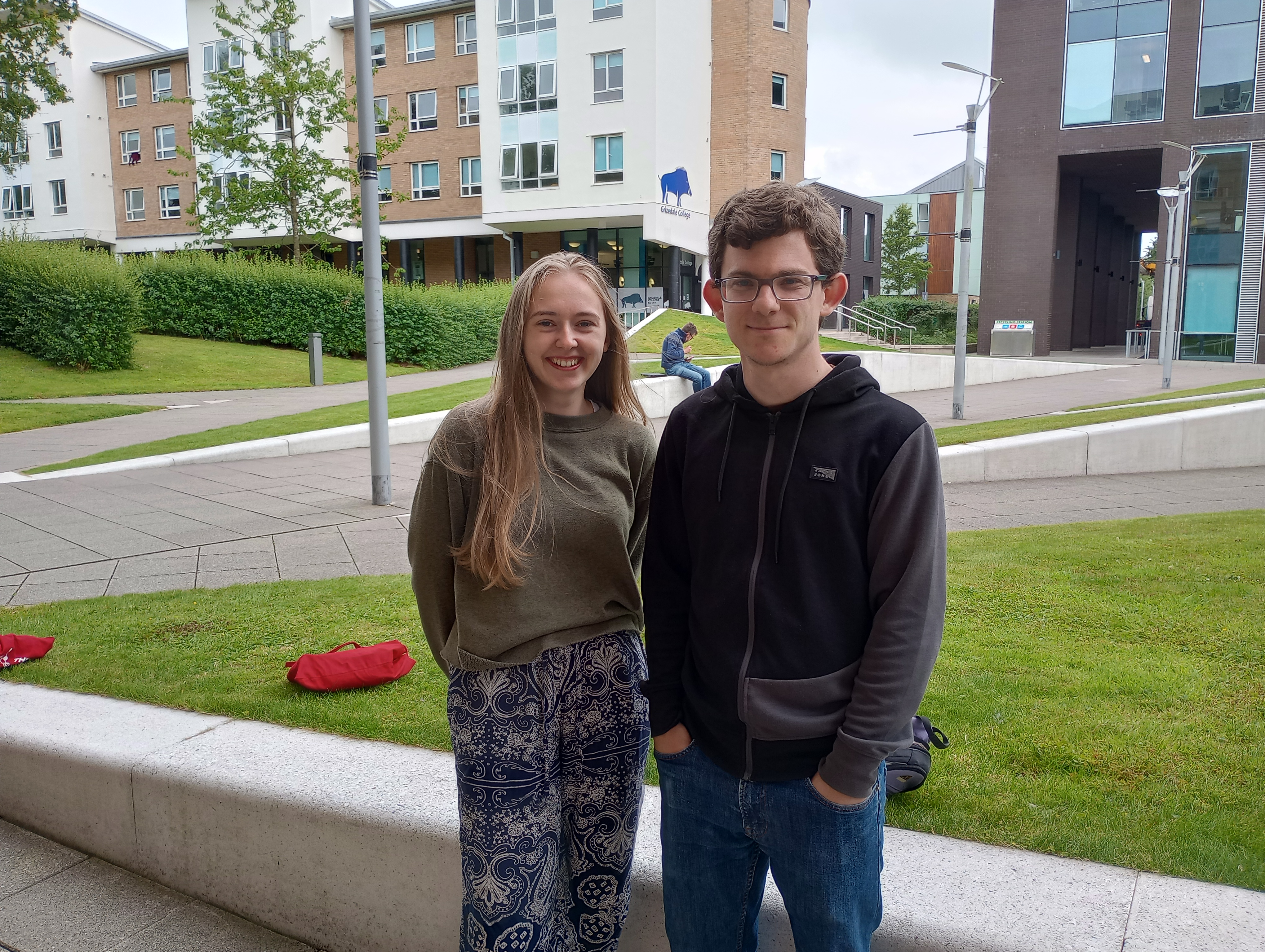 What were your general impressions of the conference?

Asier: I really enjoyed the conference. The schedule was quite intense - the five days went by in a flash. The atmosphere was pleasant and everyone I met was very friendly.

Overall, what I enjoyed the most was meeting other like-minded young researchers. It was great to talk to them about my or their research, or maths in general, or indeed to just hang out in the evenings and chat about other things over a card game or a game of pool. I think one can become quite isolated as a PhD student if one allows it (perhaps I should work less from home and come in to the office more often!), so it was nice to get this feeling of community.

Belinda: It was intense at times but mostly really good fun. There was a lot packed in to one week, but everyone was friendly and had interesting things to talk about. In general, it was a great experience!

How do you feel it has it helped your research?

Belinda: I had some insightful questions asked after I gave my talk and people approached me in the following days with some interesting ideas on my topic. It was a good way to get fresh eyes on my problem. Attending the other talks was a nice way of being introduced to new techniques and being reminded of old ones. It was also useful to meet other PhD students, and I now have contacts at other universities.

Asier: I don't think there's one specific thing I learned that is directly useful to me in my research, but it was good to get a broad overview of what's happening in the field of Combinatorics, see what problems other people are working on and what techniques are being used.

What was your favourite or most memorable talk?

Asier: My favourite plenary talk was Alex Pokrovskiy's, perhaps not so much due to the actual content of the talk, but its style and the way he explained things (I did find the talk interesting, it was just a bit removed from my research).

My favourite mini-symposia talk was Stefan Glock's. There is a celebrated result about the existence of almost perfect matchings in hypergraphs satisfying certain conditions, proven using the Rödl Nibble. Stefan talked about a new extension of this result that allows one to additionally require these matchings to be free of "conflicts", i.e. to avoid containing certain subsets of the edges.

Apart from the talks, what else was particularly enjoyable or memorable?

Belinda: On one afternoon I went walking in the Lake District with some others I met at the conference. It was a beautiful walk with lovely views and a great way of getting to know everyone.

Asier: There was something special about the small improvised concert on Tuesday evening. I don't play any instrument unfortunately, but I really enjoyed listening to the few performers that did play/sing. There was always a short silence after someone had played before someone was brave enough to volunteer themselves as the next performer - but in the end we got quite a few short performances and the concert went on for a while! The concert ended with Peter Cameron playing "Yellow Submarine" on a guitar and getting everyone to sing along.

I also very much enjoyed the football on Thursday evening. After so many days of mental effort it was great to do something physical! I hadn't played in a while which made it all the more enjoyable. I felt it in my legs for the following few days though!

Any advice for PhD students attending their first conference?

Asier: Throughout the conference: Try to meet and talk to many people.

For your talk: When preparing your talk, you will almost certainly end up in the situation of wanting to say many things and not having enough time. It can be tempting to try to squeeze in as much as possible and speak very quickly, but I think this is not advisable because you are unlikely to get your message across if you rush – I think it’s better to explain less but well. So you will have to compromise and decide what’s most important and what to leave out. Rehearse your talk – it’s the only way of knowing whether it’s too long.

For others’ talks: If there are parallel sessions its worth spending some time in advance deciding which one to go to. Also, in general its worth briefly reminding yourself shortly before a talk what it’s about – of course the topic should be properly introduced by the speaker during the talk, but I found that having a rough idea of what’s going on in advance helps.

And most importantly: Enjoy!

Belinda: It can be quite overwhelming so make sure to schedule yourself some breaks! Also be sure to introduce yourself to new people, especially other PhD students as you’re all in the same boat.