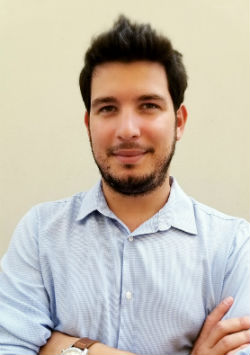 Evangelos Ch. Mitsokapas completed his PhD studies at the Dynamical Systems and Statistical Physics Group, under the supervision of Dr. Rosemary J. Harris, at the School of Mathematical Sciences at Queen Mary University of London.

His research topics lie within the field of Statistical Mechanics, non-extensive complex systems and the behavioural study of systems exhibiting non-markovian dynamics. His approach includes extreme-value memory modelling under the concept of peak-end rule, as well as developing applications in modelling collective behaviour in real systems with memory.

Evangelos obtained his postgraduate Diploma (MSc) on Applied Mathematics in 2016, from University of Patras, Greece, where he completed his thesis, entitled: "Statistical Mechanics and Entropy of Complex Systems". The purpose of his study was the introduction of the so-called Non-Extensive Statistical Mechanics, which could provide a more accurate macroscopic description regarding the chaotic behaviour of Hamiltonian systems of non-linear oscillators, that cannot be described by the classical approach of Boltzmann-Gibbs Statistical Mechanics.

After completing his postgraduate studies, he was invited for a short period of time to Nazarbayev University of Astana, Kazakhstan, to work on the numerical simulation of the dynamics of complex systems.

On 2022 Evangelos obtained the Qualified Teacher Status from the Department for Education of the United Kingdom.

During the academic year 2020-2021, Evangelos has been delivering additional classes on Dynamical systems and advanced Probability and Inference Statistics at King's College London, for UG students at the Department of Mathematics.